Hi, guys! Long time no see! In the month since I’ve last posted, I’ve been busy as a bee working on a special project!  Over at the Mood Sewing Network this month, we were challenged to make a look inspired by a SS 2014 runway collection, and today I can finally show you mine!  Please pardon the photos- it was 21 degrees Fahrenheit and super windy, so I was freezing!

I’m not someone who really follows runway fashion, and, prior to this challenge, I had never even heard of the designers I’m drawing inspiration from.  But as I looked at many, many, MANY photos of runway shows, I kept coming back to Sea‘s spring RTW collection (seriously, check it out- there are some really cute looks here!).  The collection was split between looks that were tough, dark, and semi-androgynous and looks that were romantic and feminine. I especially liked the looks where the designers mixed up prim, proper textiles and silhouettes with modern details like cut-outs and exposed zippers. 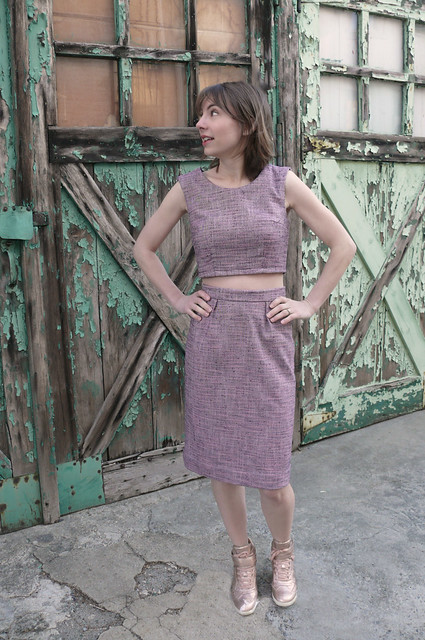 I decided to make a traditional cocktail dress and help it to reverse age by turning it into a two-piece.  I wanted to use a fabric that felt classic and maybe even a little old-fashioned, so I selected black and pink cotton-poly tweed from Mood Fabrics NYC. It has a very loose weave, and looks like a something you might use for a French jacket or something similar. 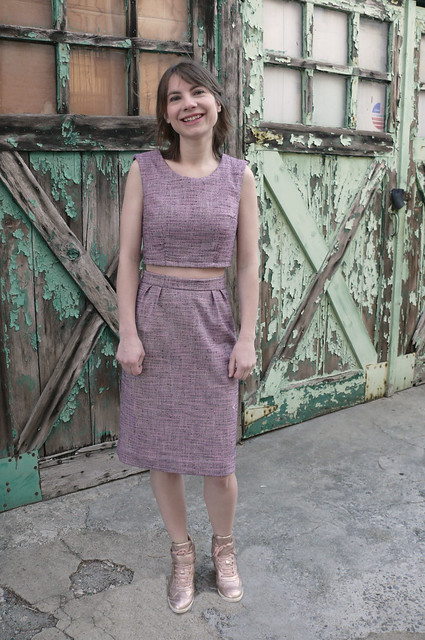 I wanted to start with a sweet ’60’s vibe, so I used the skirt portion of my favorite vintage McCall’s 5995 pattern (here it is as a dress, and as a pencil skirt).  I changed the kick pleat to a slit and drafted a waistband with a finished width of 2″ and a 2″ overlap.  I wanted the silhouette to be neat and clean, but not too tight, so I was careful to fit the skirt but not go overboard. 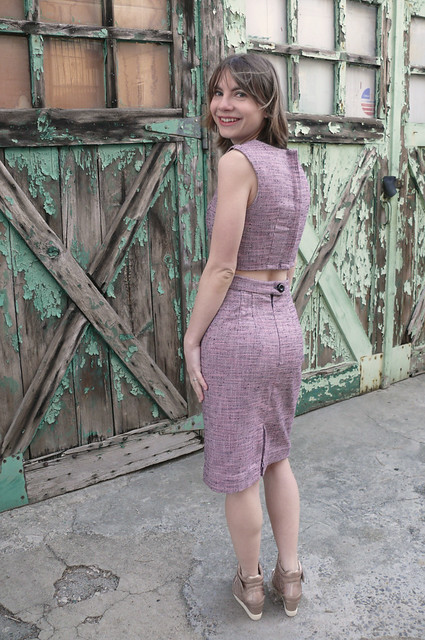 I liked the cut-outs in the inspiration photos, but decided to take the idea a little further and turn the dress into skin-baring separates.  My original plan was to make the top from the Named Patterns Vanamo dress, but after a failed muslin, I abandoned it and decided to draft my own.  I stole the neckline from the Deer & Doe Belladone pattern, and fudged my way through the rest of the patternmaking until I had something workable.  The top closes with a separating zipper that’s covered by an overlap.  The neckline and armholes are finished with an all-in-one facing, which I didn’t enjoy sewing one bit- I didn’t think through my construction and hand-stitching rapidly-fraying tweed wasn’t one of my happiest sewing moments! I finally enlisted Man Friend’s steady hands and cool head, and he helped me forge through when I was down to my last nerve! The waist is also faced, which helped to reduce bulk, too.  I’m not kidding when I say that thinking out how the zipper and facings needed to be installed kept me up at night! I literally laid in bed, unable to sleep, sorting out the construction order and plan of attack on more than one night! I didn’t come up with a perfect plan as I still had to do tons of seam-ripping and re-sewing, but everything came together eventually. 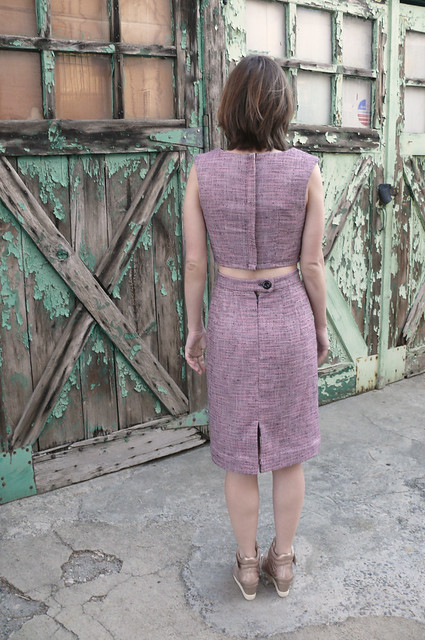 …Did I mention the fabric has a very loose weave?  This makes it drapey and soft, but it was too drapey for my purposes, so I underlined every piece with black cotton shirting, basting the two layers together in the seam allowances and along the dart legs and centers. This made it much easier to handle. Unfortunately, it frayed like the dickens, so I also fused 1/2″ strips of interfacing to the seam allowances to help the fabric stay together.  This was a SLOW project!  By the time I’d underlined the fabric, things got pretty bulky, so I left off the planned linings altogether.  Instead I finished the seam allowances by zigzagging them and then stitching on rayon seam binding and wide ribbon inherited from my mom’s stash. 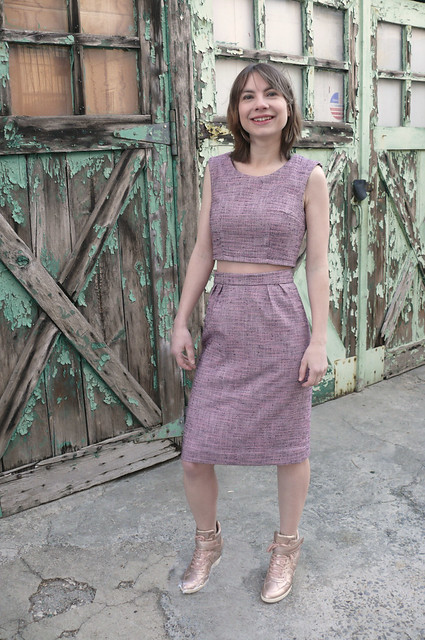 Look how perfectly the dress matches my purple skin!

I wanted to be really careful with proportions and fit for this outfit since I knew I would feel really uncomfortable or worse, trashy, if there was too much skin on show. But I wanted to make sure that the top was cropped enough to top to give a youthful edge to the look, like belonged on Jackie O’s younger, hipper sister.  I finished the skirt first so I could make sure the top was the right length.  I’m really happy with the final proportions.  I feel bold and sassy in this outfit, but still remarkably put together.  One thing that worries me, though, is that I’m not 100% certain where I can wear it!  Any ideas? 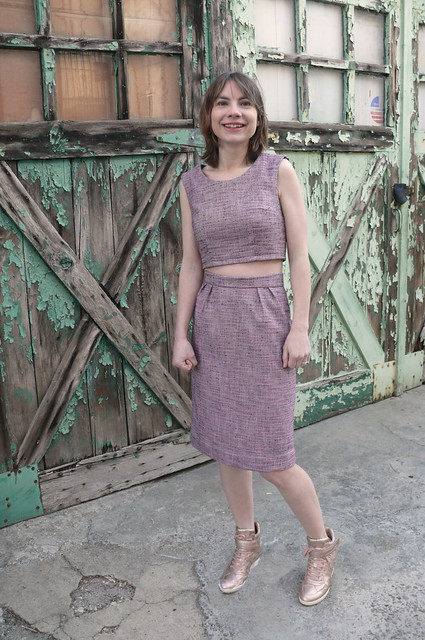 Although it was a challenge to decide on a runway-inspired style and sew it up, it was fun to work in such a different way and to wear something that’s a bit of a departure from my usual style.  But what about you guys?  Do you draw inspiration from runway looks?  Are there any spring trends that you’re excited to try out? 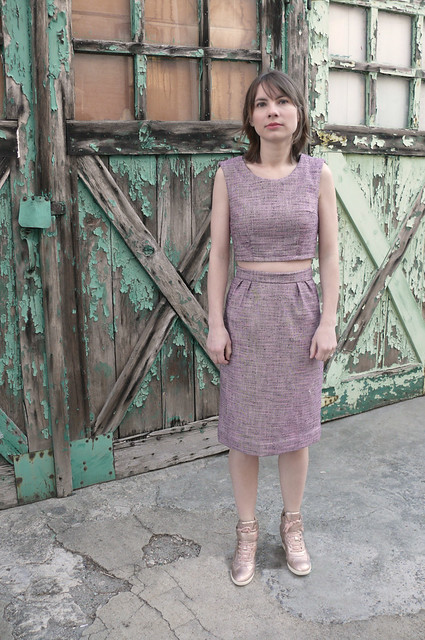 I wanted to do a supermodel pose, but I’m not sure my expression is vacant enough.