The unthinkable has occurred. I sewed something for Man Friend!!!

What? You didn’t think I’d ever get around to it?  I finally decided to use our anniversary two weeks ago as a firm deadline and I actually finished it in time! 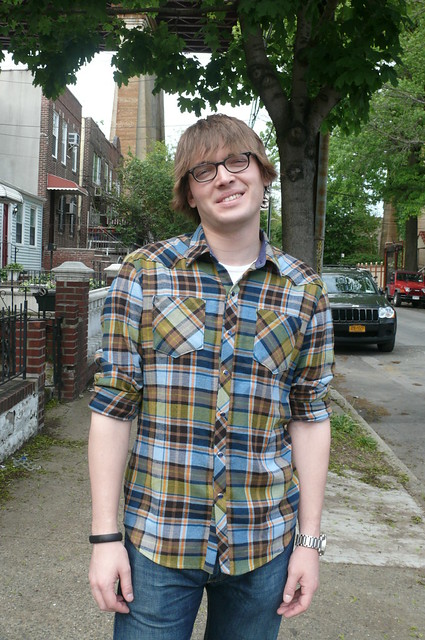 This is the ubiquitous McCall’s 6044. There are so few sewing patterns for men, and even fewer of them are styles that Man Friend would wear. Luckily, this western-style buttondown is really close to what he likes in a RTW shirt. The pattern also includes options for a yoke-less, regular buttondown, with the option of short or long sleeves.

I’ve had this plaid flannel stashed for quite a while with the intention of making a men’s shirt with it. It was $5/yd at one of the cheap, small stores in the Garment District. I’m really not in love with it, although I like the colors- cheap flannel just doesn’t stay on grain at all! It stretched, sagged, and just generally made matching the plaid really unpleasant. Even after spending tons of time lining everything up, it doesn’t look all that great. Ugh! 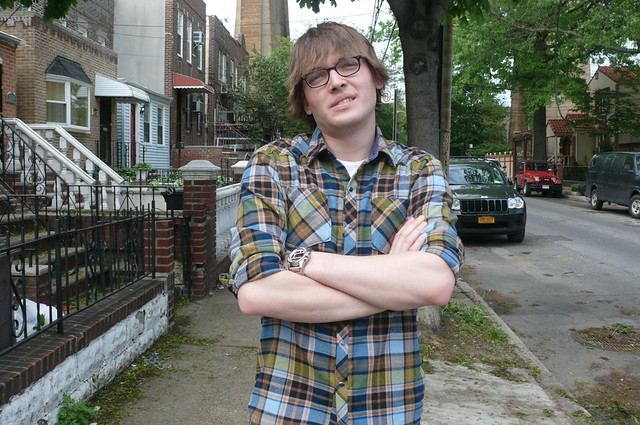 I cut the front and back yokes, the pockets, cuffs, and the top button placket on the bias. I only had two yards of fabric, but I was able to squeeze all those pieces out with just tiny scraps remaining. So I cut the undercollar, the inner collar stand, and the inner cuffs from a contrasting fabric (the chambray-look flannel I used for my Meissa blouse).  I really like the subtle detail of the contrast, actually. 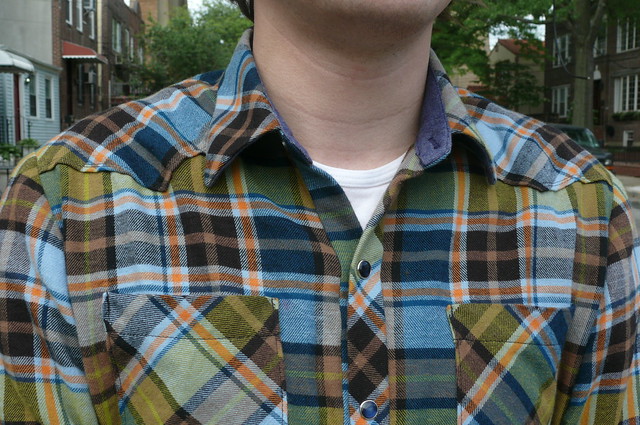 Just a little bit of contrast at the collar stand!

I cut a straight size medium and didn’t make any fit alterations (I treated this as a wearable muslin). I could probably narrow the shoulders just a touch, but other than that, the fit seems OK, or at least as good as his RTW shirts. Do you guys see any fit problems in these photos? I’m not very confident diagnosing them in men! The only changes I made were eliminating the pocket flaps (I sewed them on, but Man Friend didn’t love them), shaving 1/8″ off the undercollar and inner collar stand (this makes it easier to roll them to the inside), and adding tower plackets to the sleeves. I followed the Four Square Walls tutorial for sewing on the collar, and I sewed on the cuffs the exact same way.  This technique really makes sense to me. 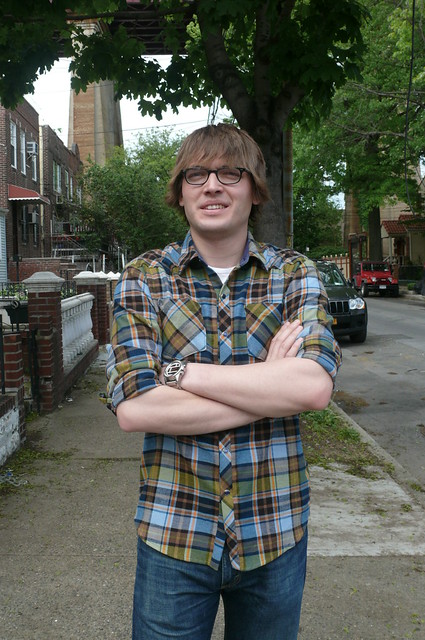 Let’s talk about those tower plackets!  As drafted, the sleeves are two-piece, and you stop sewing the seam a few inches before the cuff edge so you can narrow hem the opening you’ve created instead of using a placket. That’s a simple way to construct a shirt and good for someone who’s intimidated by plackets, but I wanted it to look a little nicer. First I changed the two-piece sleeve to a one-piece (I just overlapped the pieces and taped them together), then I downloaded Lisa’s tower placket template instead of drafting my own (thanks, Lisa!!).  I have David Coffin’s Shirtmaking, the primer for techniques like this, but my reading comprehension must not be that great as I struggled to understand how I was supposed to sew it on.  Luckily, a Google search brought up a photo tutorial from the Colette Hawthorn dress sewalong, which really helped me to make sense of the process.  This would’ve all gone pretty smoothly, but I made an idiotic mistake that complicated things. You see, when you do things differently from the pattern instructions, it’s wise to make sure that your construction order will still be the same. Unfortunately, I didn’t realize that it’s way easier to sew sleeve plackets when you haven’t yet sewed the sleeve seam, and I’d already sewn the seam, serged and topstitched it, set the sleeves in, and serged the armhole seams! I had to wrestle and wrestle and wrestle to get the placket sewn in with the sleeve closed, and it really wasn’t fun at all. Whoops!

My next dumb mistake was that I didn’t realize that adding a tower placket made the sleeve edge larger (since you’re sort of binding the edges of the slit you make, instead of turning them under and hemming like the pattern instructs you to do- does that make sense?), SO, when I went to attach the cuffs, I had to sew with a scant 1/4″ seam allowance. Super scary! I realized later that I should have just increased the intake of the pleat to make the sleeve the proper size, but at the time I was too frazzled to think it through clearly. Live and learn! 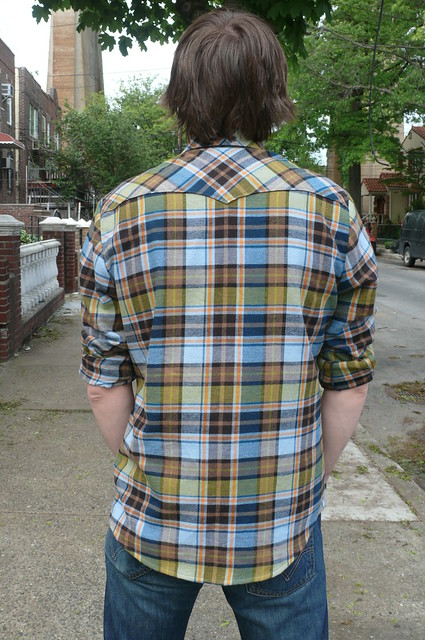 Man Friend: “Whoa, it looks like I’m peeing!” It totally does.

After my great debacle with pearl snaps on my Archer shirt, several commenters mentioned the Snap Source snap setter as a better option. I ordered it and used it for the first time with this shirt. It’s a much easier process, and way less frustrating than the Dritz snap pliers (I’m not even going to link to them because I hate them and don’t recommend them at all). But I must not have been getting them on tightly enough or something because twice since I finished the shirt one side of a snap has pulled out of the fabric and I’ve had to fix it. I think the real solution here is to just use buttons! I used a button and buttonhole on the top collar stand button- I inspected his RTW shirts, and the ones with pearl snaps all had one button in that position.

I’m just glad I finally made something for Man Friend! He’s so supportive of my sewing, and it’s about time that I took the time to make something for him! He’s looking forward to the “real” version of this shirt, a blue and red plaid flannel that he picked out from Mood a few months ago (just a word of advice, ladies, if you take your fella into the fabric store, you MIGHT end up leaving with a bag full of fabrics for him and a whole bunch of crazy requests! I may have agreed to make him a pair of pinstriped dress pants… eek!). Next time around I’ll know what to look out for! 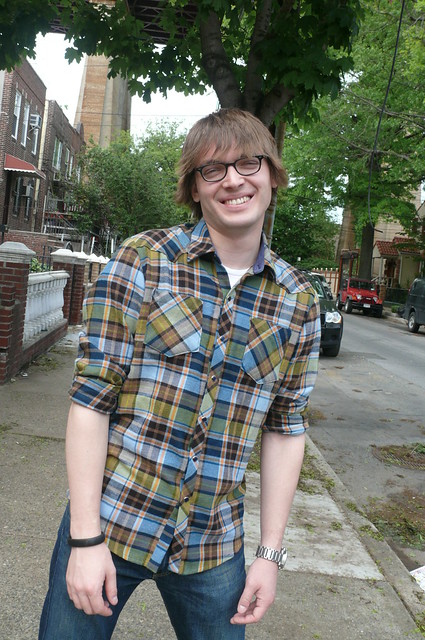 I had to tell an idiotic joke to get one real smile in the entire batch of photos!

Alright, let’s talk about dude sewing! What have you made for the men in your life? If you’re a sewing fella, what do you like to sew? Are there any patterns that you wish existed? Any favorite men’s patterns?