Hi, guys! Hope you’re all well! I’m traipsing around Iceland at the moment, but I thought I’d share a little review of my new machine with you while I’m away. I’ve had my new Juki TL-2010Q for several weeks and have constructed quite a few garments on it.  There are already a few reviews of it online, but most seemed to be written by quilters and I thought a garment sewing perspective on this machine might be useful to someone who’s considering this guy.

So, long story short, this machine is entirely Oona‘s fault. I visited Sew-Right in Bayside, Queens with her when her machines were on the fritz, and friends, I had NO intention of buying a new machine. NONE. I was just there to play with a Bernina or two and to gab about sewing! I’d heard the Thread Cult podcast episode, “Boost Your Sewing Machine IQ” with Harvey from Sew-Right and was intrigued to visit the shop. I expected to be completely blown away by the Berninas as I’d always heard so much about them, but nothing really clicked for me (although the Bernina 350 Special Edition made a buttonhole so beautiful it nearly brought tears to our eyes… you guys, it was ART). What DID click was this machine! I placed my foot on the pedal and was smitten! I tried fabric after fabric on it, placing layer upon layer of thick denim under the presser foot, and he chomped away happily! Impressive! I managed to tear myself away from the machine, thought about it for about a month, and did some research to see if I really wanted it. I noticed in a photo on Cloth Habit that Amy owns this Juki, too, so I sent her a long, annoying email with many, many questions, and after her kind reply, I knew this was the machine for me! 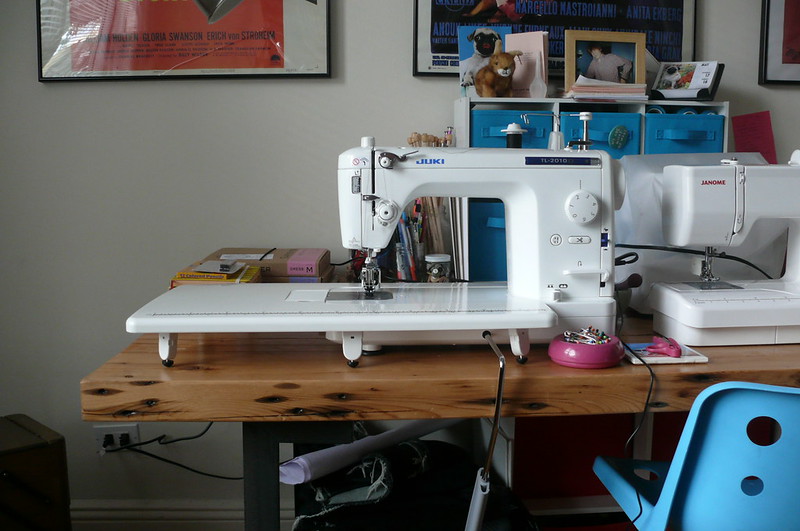 So, some facts about the machine: it’s a straight-stitch semi-industrial. What this means is that it only does straight stitches- no zigzags, no buttonholes, no fancy stretch or embroidery stitches. It’s also much, much faster than the average home machine (about 150% faster). This thing is FAST, like an industrial, but doesn’t take up as much space (and isn’t as loud). It has a speed control lever, though, so you can cap the speed if you’re worried about getting used to it (or letting a child or newbie sew). Also, it has a knee lever to raise the presser foot and a thread cutter (for both needle and bottom thread) in the pedal- you just press with your heel and it cuts the thread. Between the knee lever, thread cutter, and faster stitching, I feel like I whiz through garments now! 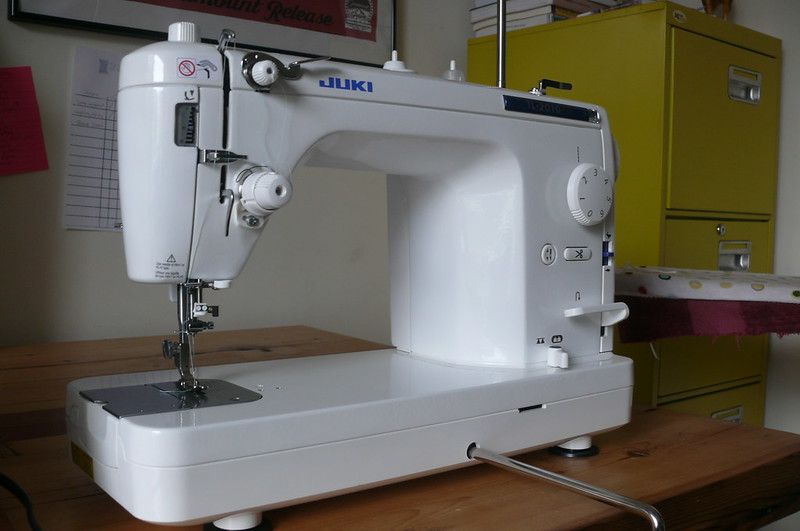 This machine is a BEAST. It’s a SOLID machine, and is insanely heavy, so it doesn’t shake at all when sewing. It topstitches beautifully, and stitches together garments really quickly. Mary Ann at Sew-Right uses it to sew bags, and I can see why- it has no problem getting through thick fabric (I tested it with six layers of heavy denim and it sewed without complaint). It comes with a MASSIVE extension bed- good for big projects, but a bit too big for my workspace- and several feet, including a walking foot, a zipper foot, and a 1/4″ foot (dudes, this makes topstitching super easy). I love that it comes with the walking foot- I love using one, and buying them separately is annoying. It uses Juki industrial feet, which are really cheap, so that’s nice.

On the negative side, this probably isn’t a good stand-alone machine for garment sewers. Like I said before, it’s straight stitch only, so if you want to sew knits/buttonholes/etc, you have to use another machine. I’ve been really happy with my basic Janome mechanical, but have wanted something heavy duty as a second machine, so this really fits the bill, but I couldn’t have just this machine. It’s been a nice luxury to be able to say, stitch on one machine, and do all my topstitching on the other without having to stop to re-thread. Another thing that’s different/slightly annoying is that you have to oil this machine before you use it every. single. time. It’s very quick and easy to do, but I struggled at first to remember to do it. 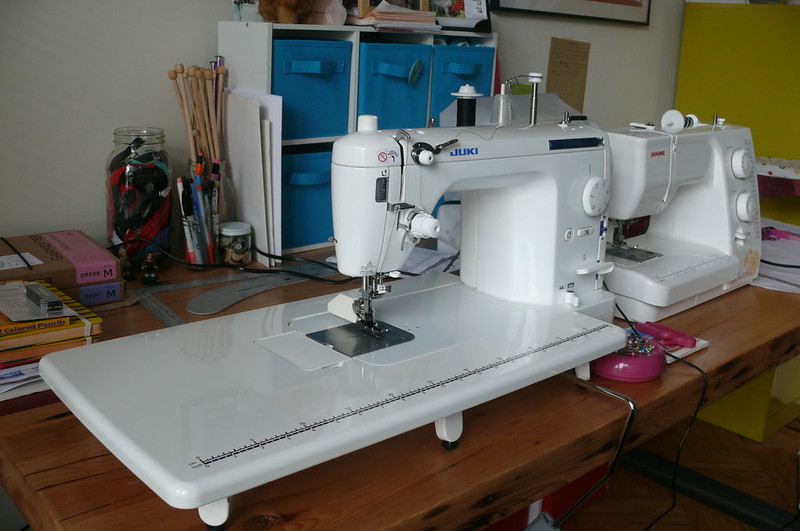 Now, I know you could find tough, reliable straight-stitch machines in the used/vintage market, and it was every bit my intention to buy one as a second machine. But I couldn’t shake a nervous feeling about it. I grew up with used cars and appliances that always felt like they were inches from death, and it kind of stresses me out now to think about spending money on something that’s not under warranty (especially after my previous car, a 1976 Volkswagen purchased on eBay… an awesome set of wheels, but it was just too nerve-wracking to have to mutter a prayer before turning the key every single time!). I know it’s a luxury, but I wanted to invest in a machine that’s covered by manufacturer’s and dealer’s warranties, so that’s why I splurged on this machine. I absolutely get the appeal of vintage machines and I really wish I had the guts to get one this time around, but I’m just terrified by the thought of buying something used and having it crap out on me right away! I also really liked buying this from a dealer. It’s really nice to have someone show you different machines, help you decide what works for you, and run you through the paces with a new machine. My Janome Magnolia 7318 was a gift, and was purchased online, and while I love it, it would’ve been nice to have someone to show me its capabilities in person. 🙂

So, that’s my new baby Juki! Hope this review is helpful to someone! Now, tell me, what’s your philosophy on sewing machines? Top of the line with lots of bells and whistles? Cheap beginner machine? Vintage all the way? Too many machines to count? Dish!