It’s official. This is my new summer uniform!

Guys, I’ve been looking forward to the release of this pattern since I heard rumors that it was coming (in fact, I crushed hardcore on the original version of this dress in Jen’s rtw line, Hound). It’s the Alder Shirtdress from Grainline Studio, and it’s just the perfect summer dress! There’s even a lovely print version for the PDF-averse! When I heard the launch date was in July, I picked out fabric for my July Mood Sewing Network project, then waited semi-patiently for the pattern to be released! I’m not even kidding when I say that knowing this pattern would be waiting for me on my return helped me to avoid post-vacation depression (that and seeing the pugs again, of course). 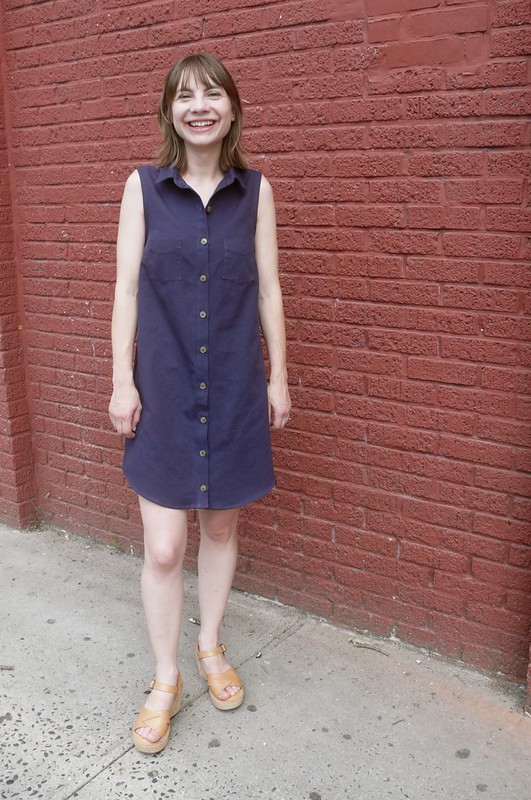 I’ve really been going crazy with prints lately, so I decided on a nice navy instead for my first go at the pattern. Navy is my go-to neutral color- it’s not as harsh on my pale skin as black, but it’s still pretty chic, in my opinion- and when I found this shade in a crisp cotton pique, I was over the moon! (This Japanese cotton pique looks exactly like the one that I used, although I picked mine up in-store at Mood Fabrics NYC).

Look at that great texture! It reads a little sporty in person, in a courtside-seats-at-a-tennis-match kind of way.  The fabric has lots of body and not much drape, so it really gives you a crisp a-line shape in this dress. It’s really, really breathable, a must for a summer dress! It’s a medium weight and it’s nice and opaque, so it doesn’t need a lining- perfect! 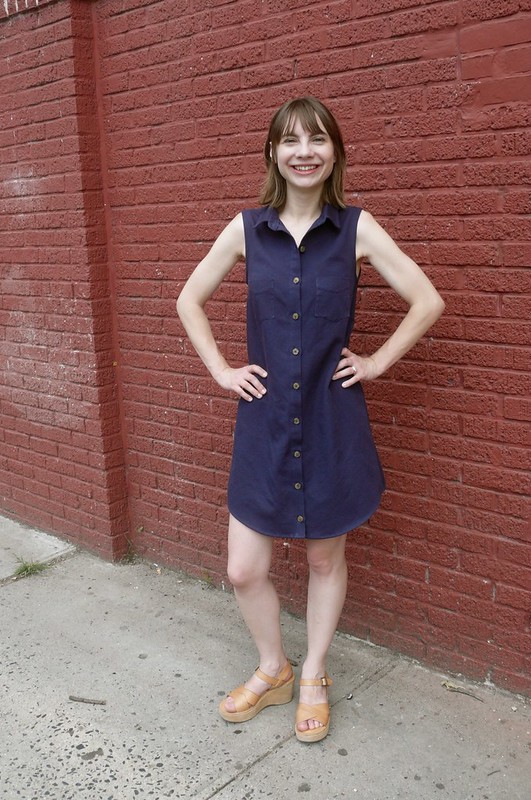 OK, back to the pattern. This is view A, and it’s a really fun sew! It’s like making a buttondown shirt, but without having to set in sleeves or worse, sew the sleeve plackets! It’s a simple silhouette, but it’s got nice lines, and the drafting is great. Not to geek out too much, but the armscyes are just the perfect depth! Not too low, not too high- just right! 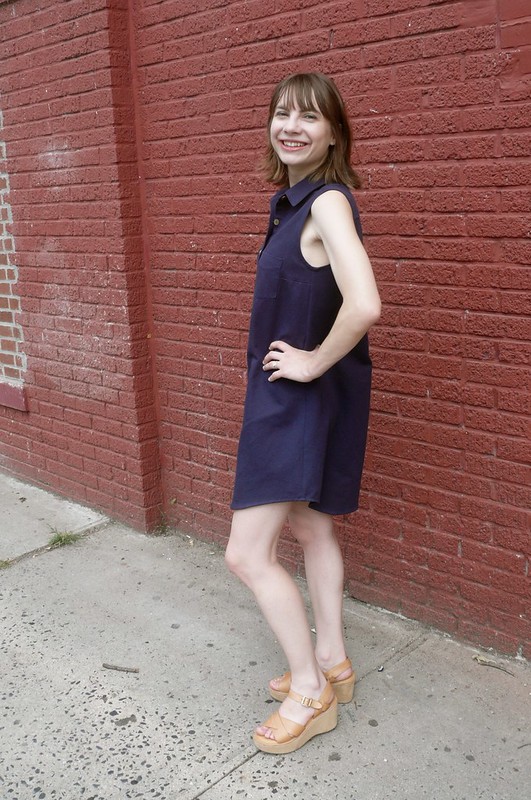 I sewed a straight size 4 without any alterations (my bust is a 4 and my hips are a 0, so there’s a bit more ease there than there would be if I graded between sizes, but I decided just to sew it up and see how I felt about it). I don’t mind the additional fulness at all. You get a nice clean finish if you follow the pattern instructions. There’s an inner yoke to clean finish that seam and the armholes are finished with bias binding. The side seams are the only exposed seams, so I serged them, but I would use French seams on thinner fabric for a completely immaculate finish. 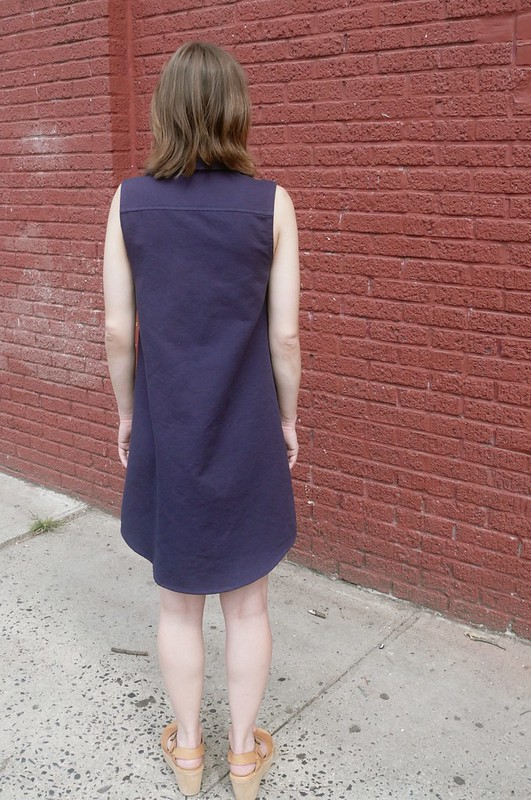 There’s a subtle difference between the right side and the wrong side of this fabric, so I was careful to mark all the wrong sides with chalk. Isn’t it annoying when you forget to do that and you end up with one part of your garment that’s just a little different than the rest? Ugh! Other than that, I didn’t use any special techniques! This was a really straightforward project. 🙂 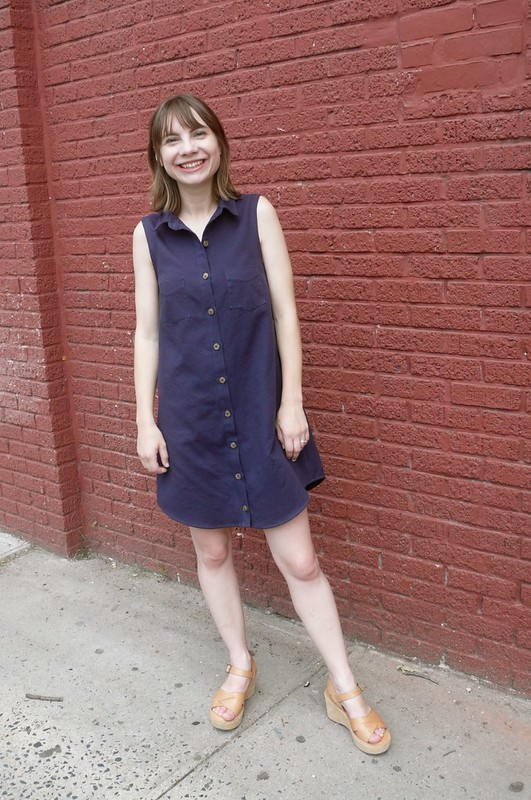 Overall, I’m really happy with my new dress! Quite a few of my other dresses are just a little too flashy for wearing around the neighborhood or even to work (ummmmmmmmm PIRANHAS, I’m looking at you!), but this is just right. It’s nice to have a basic dress in my closet. 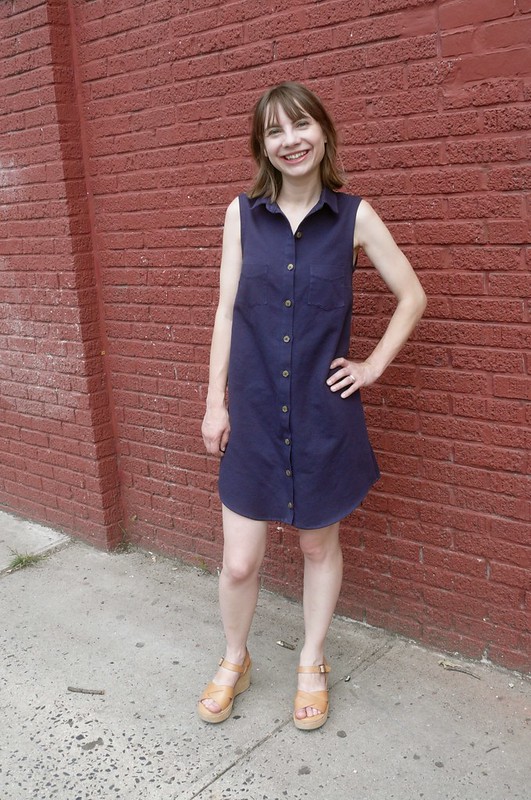 But don’t worry- I haven’t completely reformed! In fact, I’ve already cut out a second Alder in a gaudy large-scale print. Mwahahahahahaha! 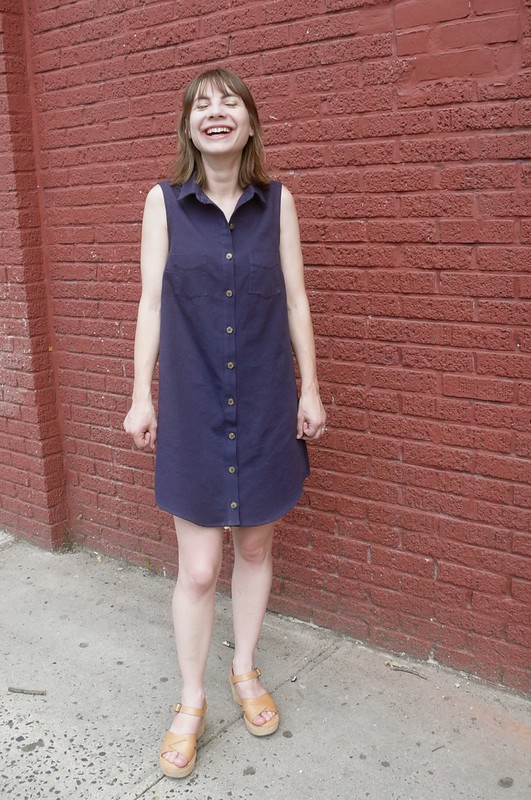 This was the exact moment when an SUV full of beach-going ladies pulled up next to me and one of them shouted, “Work it, girl!” A second later they turned up their dance music and Man Friend laughed so hard he almost fell over.