Hi, guys! I hope you’re all well. Before we start talking sewing, I just want to take a moment to say that if you’re reading from Baltimore or Nepal, you’re in my thoughts and prayers. The firsthand updates from my sister in Baltimore and a childhood friend in Nepal have been so heartbreaking. Praying for healing, restoration, and safety for everyone!

OK, let’s talk about the Morris blazer. I’ve been anxiously awaiting the release of this pattern for ages! In fact, I’ve had a piece of ikat linen stashed away for it for something like two years! So I was surprised to find out that it was designed for stretch wovens or stable knits… pleasantly surprised! I had a RTW double-breasted blazer in French terry that I wore until it was dead, and never found a replacement. I frequently wear my woven blazers, but it’s nice to have something even easier to wear for situations where you’ll be running around or taking your jacket on and off. 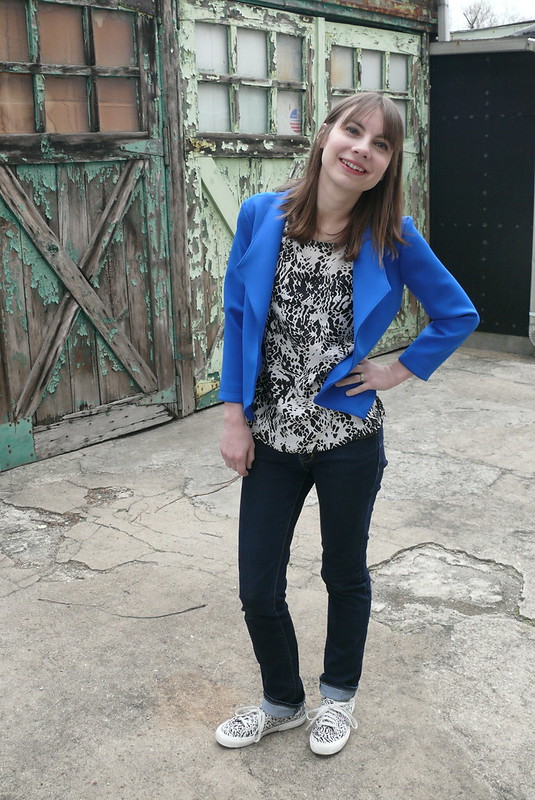 So, for April’s Mood Sewing Network project*, I ran to Mood with 15 minutes to spare before my evening class (NOT RECOMMENDED!) and raced straight up to the neoprene section. I’d planned to look for a fun print, but this color jumped out at me and I had to have it! As I had the fabric cut, another shopper spotted it and hovered, waiting to grab the bolt as soon as I was done with it. The color is that good!

Now, neoprene is one of those fabric fads that seem to pop up from time to time. All of a sudden it’s everywhere! I’ve been curious about it for a while, but I’ve mostly seen it used for bodycon dresses or pencil skirts and that’s just not my cup of tea (this particular fabric was labeled as Alexander Wang, and I’m pretty sure it’s what he used for this dress). But I thought it would be a fun experiment to try a nontraditional fabric for a blazer and thought it might work for the Morris since it’s such a streamlined design. 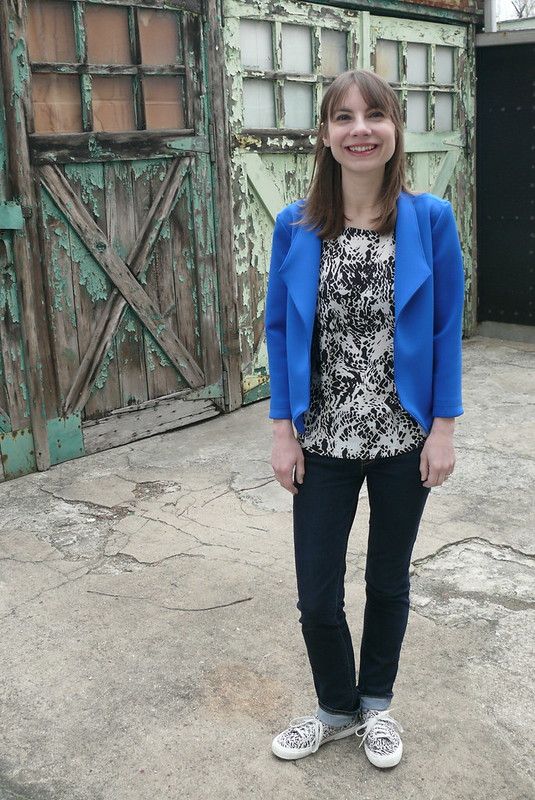 Before I sew with a new fabric type, I like to stitch samples to make sure I’m making good decisions before I start in on my garment. I had best results using my walking foot, a 75/11 ballpoint needle, and a regular straight stitch. Since the fabric is pretty thick, I had to lengthen my stitches a bit to get them to a normal size. I found that the fabric layers slipped a bit as I sewed, so I had to sew slowly and use lots of pins. I tested out binding the seams, but in the end decided to reduce bulk by just leaving them unfinished. As you can see, the lapels have tons of body in a fabric like this, which I like, but if I changed my mind, I could tack them down to the jacket front with a couple of teeny stitches. 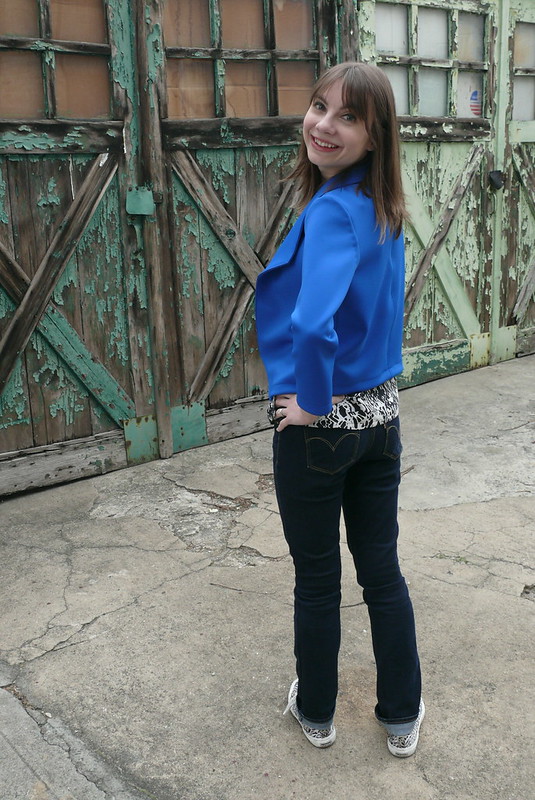 I interfaced the facing pieces with Pro-Tricot Deluxe Fusible from Fashion Sewing Supply (don’t worry- I fused a sample piece first to make sure nothing would melt!). But pressing is pointless on neoprene, so I topstitched the seam allowances down. I actually love how this looks- it gives the jacket a sporty feel. And when I needed to turn under the seam allowances of the facings, I machine stitched on the fold line so the perforations would help me make a crisp fold. The only place I ran into trouble was at the sleeve head. There’s no way to topstitch that seam, so I opted to catch stitch the seam allowances down. You can see slight indentations from the stitches on the right side, like a blind hem, but that looks much better than a mushy seam! Speaking of the sleeves, I got to do my favorite sleeve trick, which is hemming them before I set them in. It’s so much easier to navigate those little sleeve openings when you’re not wrestling the entire jacket out of the way! 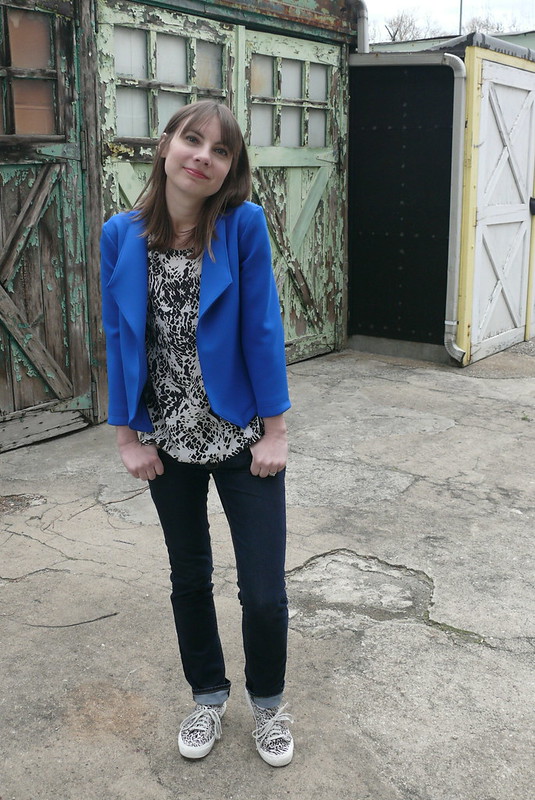 Let’s talk about the pattern. It goes together quickly, which was so fun and satisfying compared to the sloooooooow tailoring projects that have been taking up most of my sewing time lately. It’s unlined and there aren’t any pockets,which was great for a keeping the bulk down. I did notice that the facing isn’t smooth where it meets the front hemline, like Lizzy mentioned. This goes away when the collar is flipped up, so I think the lapel rolling over in heavy, slick fabric makes the front sag a bit. I will probably go back and catch stitch the facings in place (or maybe even topstitch them!). Easy fix! 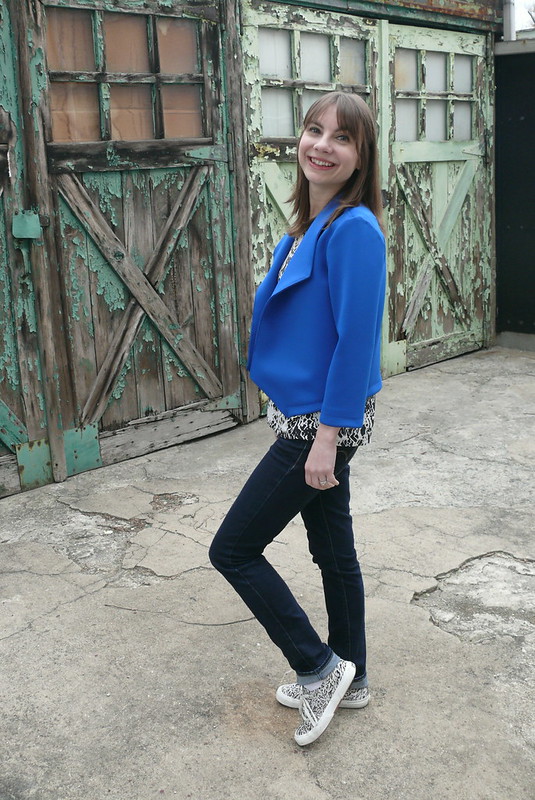 Otherwise everything went together smoothly and I didn’t have any issues. I made a 4, my usual Grainline size. I could stand to do a small narrow shoulder adjustment (I usually should, but I’m lazy and often just skip it), but otherwise everything fits well. The stretch of the neoprene is really pretty awesome- I had so much fun stretching my arms out to see how unrestricted my movement was in a stretchy blazer! I could totally throw a haymaker in this thing without popping a seam! Good to know that my outfit won’t get messed up if I get caught up in a street fight on my way to an important meeting! 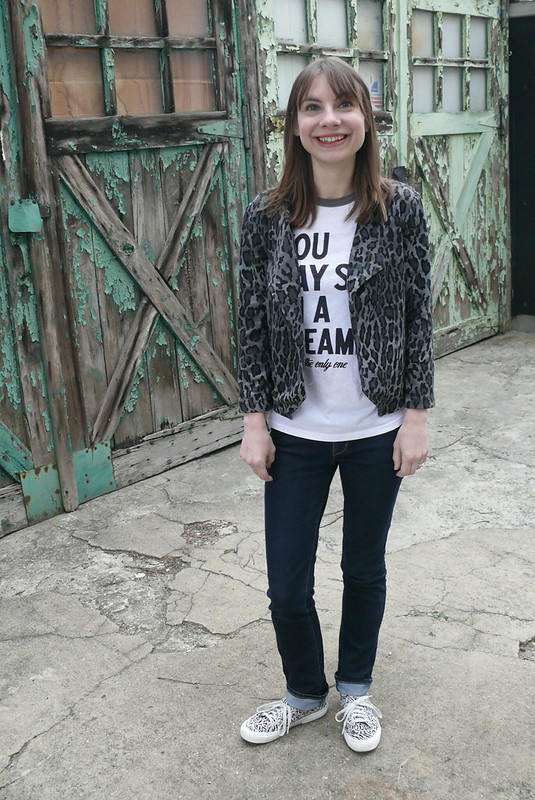 I was so pumped up after making this that I immediately cut out another! Anybody recognize this fabric? It’s leftover from my Lola dress two years ago! I’d hoped to turn it into a knit Victoria blazer, but was never confident about choosing a lining or dealing with the lapels in a knit. But the fabric was perfect for another Morris! Stash-busting win! 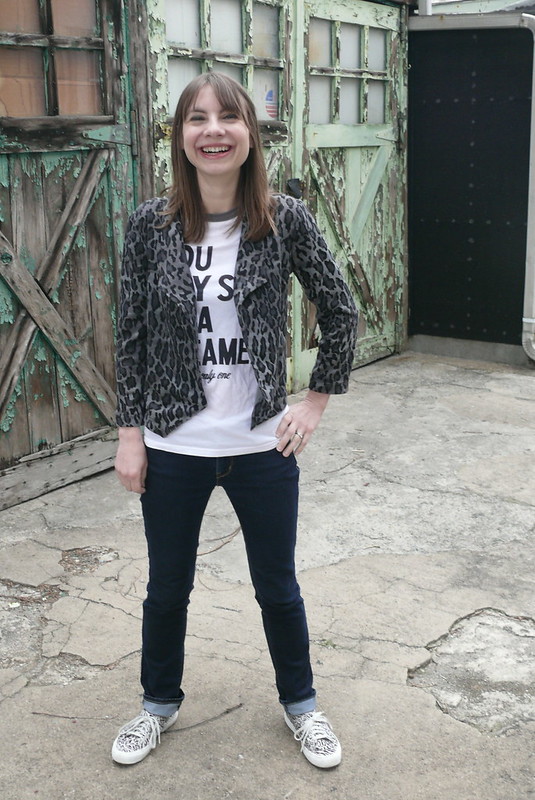 Now I’ve got a pile of fabric stacked up on my cutting table, just crying out to be blazers! I may be making nothing but Morrises for the next little while!!! 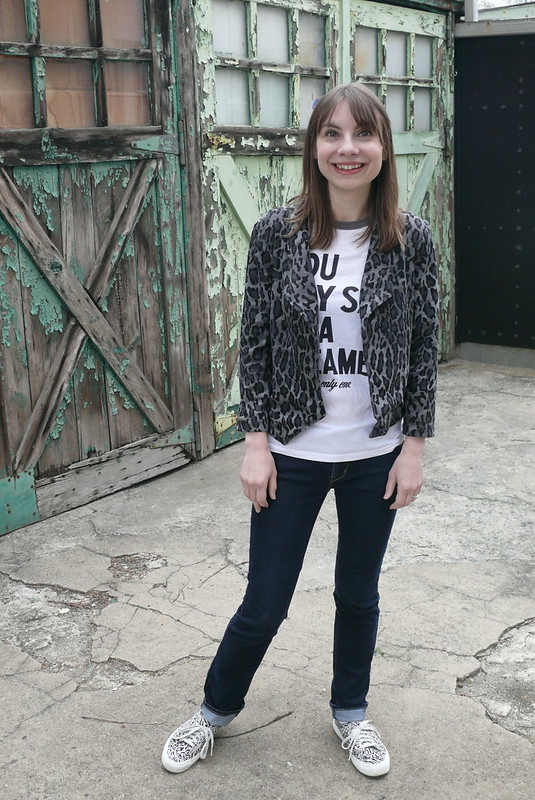 How about you guys? Tempted to try this pattern? What kind of fabric would you use? And have you tried using neoprene? Any fabric fads you’re excited to try? Any you’re avoiding like the plague? Do tell!!!

*Once a month I receive a fabric allowance from Mood to make something fun! I blog it first on the MSN blog, then over here. If I use stash materials or things purchased from another source, I’ll let you know in my post. 🙂