Hi, guys! Hope you’re all having a great day! It’s funny… now that I’ve got a couple of frustrating projects behind me, I feel so free and easy and I’ve been so productive! It’s such a bad feeling when your creativity is all bottled up after a few failures, so it’s nice to shake loose of that and just happily make things again! 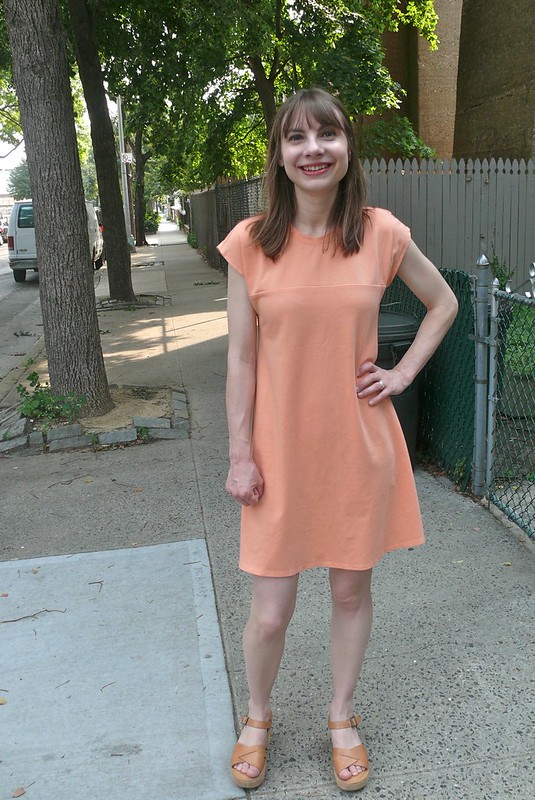 This is the Christine Haynes Marianne dress, and it’s a dress that I didn’t mean to sew (for myself, right now). My brother gave me the pattern for Christmas (thanks, Tim!) and I’d planned to make some cute long-sleeved dresses, but didn’t have time before the weather warmed up. Fast forward to a Friday evening in late June, when I had that horrible “OH NO I’VE FORGOTTEN A BIRTHDAY!” feeling. I never know what day it is, and so I’m always running behind in life… I just can’t figure out any way to stay on top of my calendar! So Friday night I realized my sister Cam’s birthday was on Monday, and I wanted to sew her something that I could mail out before the post office closed at noon on Saturday.

I thought about making a couple of Renfrews, Plantain tees, or Briar tops as I’ve already made those patterns for her, but for some stupid reason I wanted to try something new. Suddenly, I remembered Heather’s Marianne dresses and thought they would be a quick sew, so I grabbed the pattern and went to work! 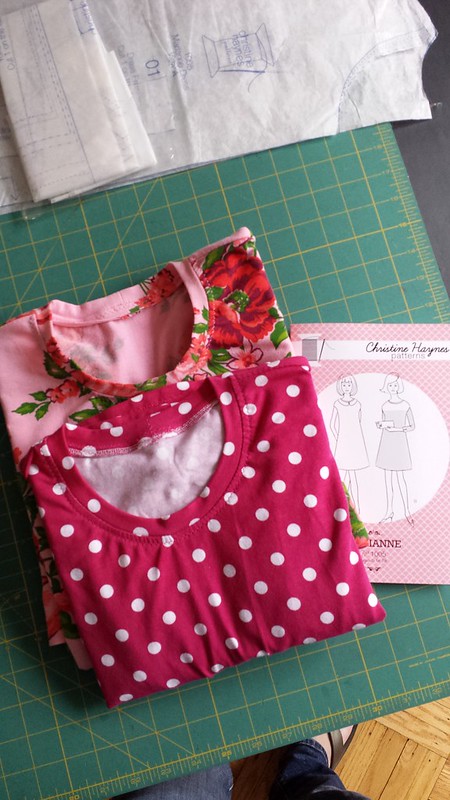 The pattern is a breeze to sew, especially if you omit the sleeves and collar, like I did. 🙂 I am not a quick sewer by any standard (I’m way too easily distracted), but these two dresses were both done Friday night in a super painless manner. Shoulder seam + clear elastic, neck band, side seams, sleeve hems, hem! It just doesn’t get easier than that! 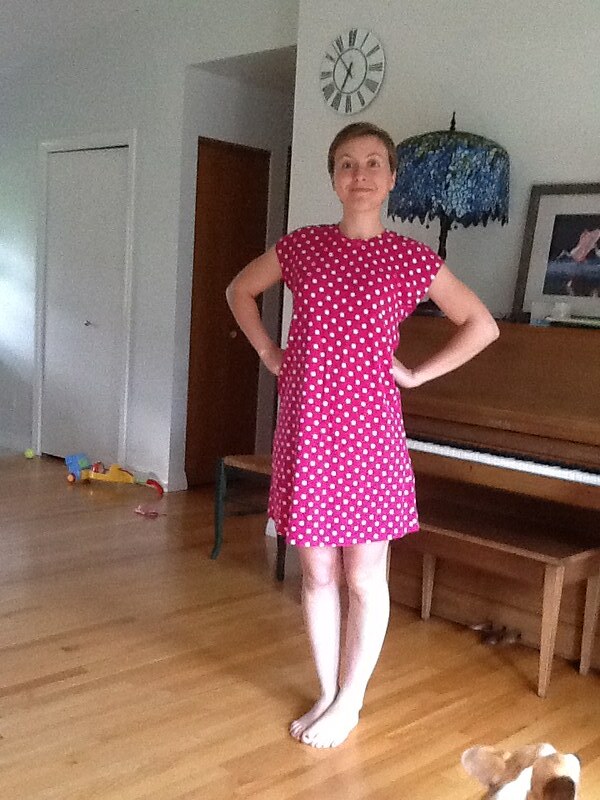 The fit of the dress is quite nice. I liked the two dresses I made for Cam so much that I decided to make one for myself, oops! I don’t like to wear tight knits, but I also don’t want to swim in them, but the ease included in this pattern lets it sort of skim over the body. I also thought the skirt might be kind of saggy or gross, but it really looks nice! The neckline is higher than I’m used to wearing, but it could easily be scooped out if you prefer a lower neck. I never really wear knit dresses, with the exception of very beefy knit dresses in the winter, so I was really shocked that I liked this! Now, you could easily size down for a closer fit, but like I said, I’m not really into that, so my fit may be a lot looser than you prefer. Just check the finished measurements! 🙂 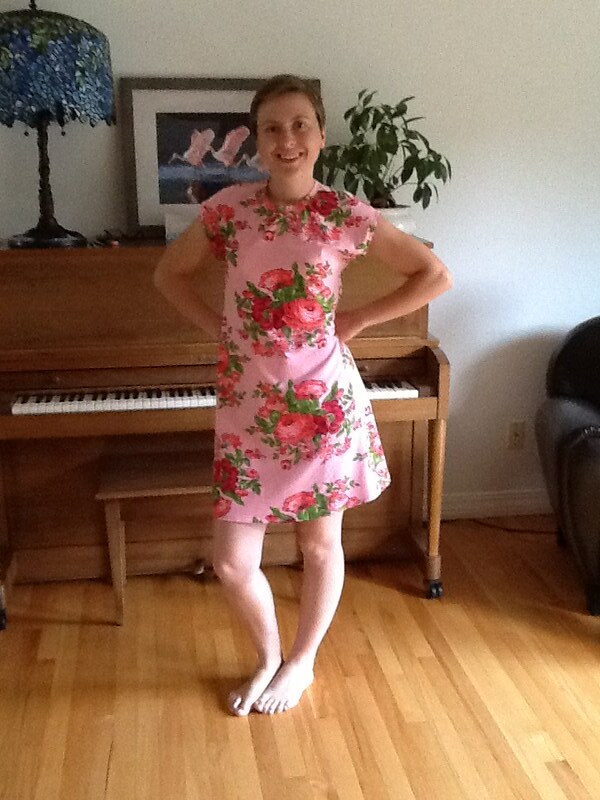 OK, let’s talk fabrics. The raspberry polka dot came from Girl Charlee ages ago, and in a big order purchased to make back-to-work clothes for Cam. It took me a while to sew through all that stuff, but now the only thing left is the blue and white stripe… it’s much more sheer than I thought it would be, which kinda limits the garments you can make out of it. 😦 Anyway, this polka dot knit is kinda stiff and not very stretchy, so I was worried that it wouldn’t work well, but it seems to be working. The pink floral is from Fabrics for Less on 39th St., bought a while back for $5. Either it shrunk tons or was cut wrong, but I was shy of a yard by a few inches. I toyed with the idea of just making a top, but I really wanted it to be a dress, so I just shortened the dress until I could squeeze the pieces on the fabric. My sister is 5’2″, I think, so I figured she could get away with it! I’m so happy it worked and really glad I could use fabrics that have been in my stash for a long time! 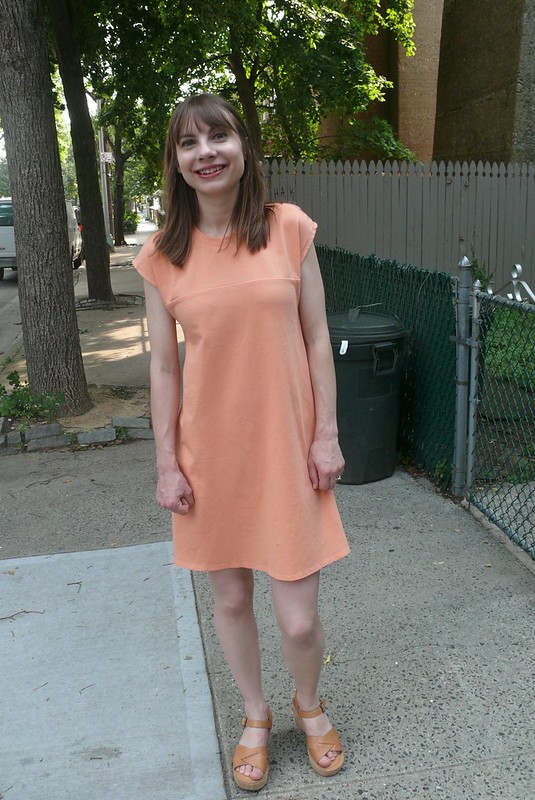 The peach fabric for my dress was also bought for my sister, I think from Girl Charlee as well, but I forget. It was intended for a Moneta, which she liked the looks of, but then she changed her mind so it’s been in my stash for a while. It’s not really one of her favorite colors, either. Now, if you’re wondering why my dress has a non-contrast yoke, it’s definitely not because I got too involved in my audiobook (guys, would you believe I’ve never read Pride & Prejudice? I feel like a dope for avoiding it because it’s so much fun!) and accidentally cut the front with the stretch running the wrong direction. I also definitely didn’t sweat and sweat until I figured out I could make it work using the pieces for the version with the yoke. DEFINITELY NOT WHAT HAPPENED. 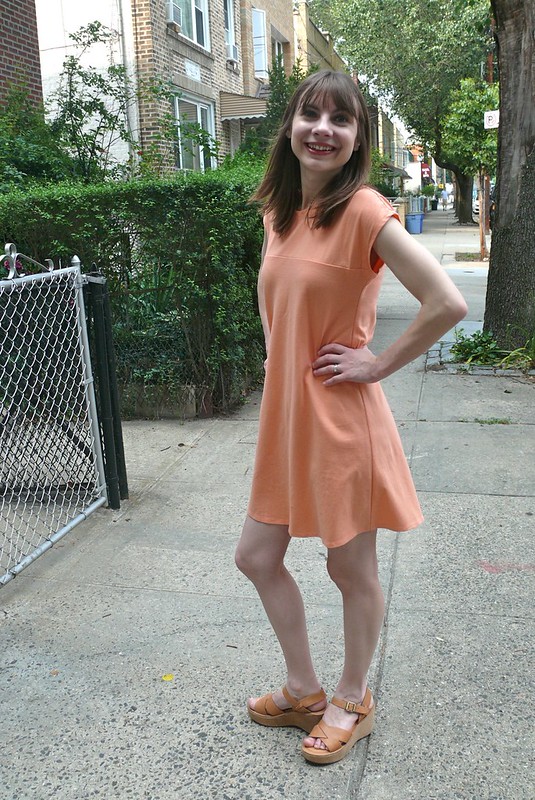 Long story short, this is a sweet little pattern and works really well for gift giving since it doesn’t have to fit super precisely. I’m looking forward to making some Breton-style dresses when the weather gets cooler… won’t that be fun? And it’s nice to know that next year, when I lose track of the time and have to make a last-minute gift for Cam, I can crank out a few of these babies overnight! 😉

What have you been sewing? Whatcha up to these days?