Hi, guys! Ever have an unfinished project that just haunts you? Every time you get the itch to start something new, you feel a twinge of guilt? Well, this sweater was one of those, so I’m really excited to finally be done with it!

Now, I love to knit, but I haven’t done much of it for Blake. He has very particular taste and if something doesn’t meet his specifications, he just won’t wear it (see: the scarf I crocheted for him right after college… I don’t think he wore it even once!). But when I saw the Bradbury pullover in the Brooklyn Tweed Men’s Volume 2 collection, I knew that he would like it. No cables, no collars, no textures- just plain stripes! That’s his jam. 🙂 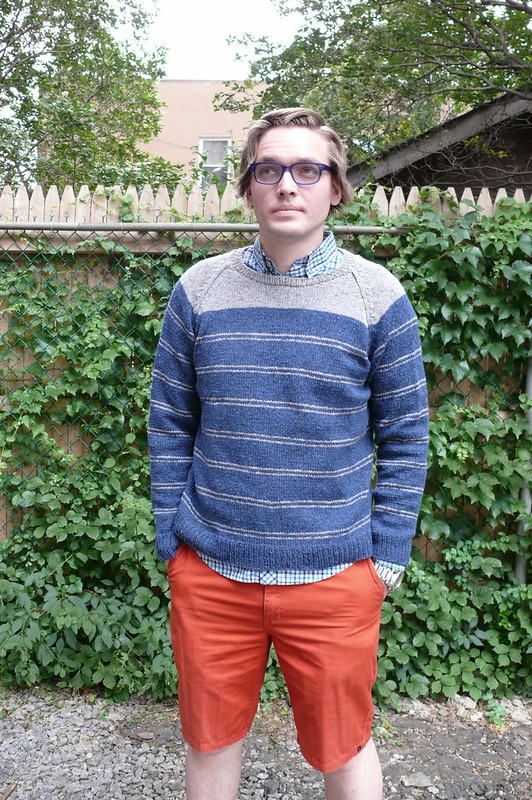 Bradbury is designed by Julie Hoover, and the suggested yarn is Brooklyn Tweed LOFT. I had never used a Brooklyn Tweed yarn before, but I decided to splurge on it for Blake’s sweater since I’d heard that it was very light and airy. I saved up my pennies and got Man Friend approval for a colorway combo of Almanac/Sweatshirt.

The thing that I like most about Brooklyn Tweed patterns is that I always feel like I’ve learned something new by the time I’ve finished. In this case, I learned the tubular cast-on and bind-off, the sloped bind-off, and a different way to knit stripes in the flat. I have to admit, though, that when I first downloaded the PDF, it took me a few weeks to dive into the pattern because it seemed like a much more complicated project than I’d originally thought and I just didn’t want to get started! 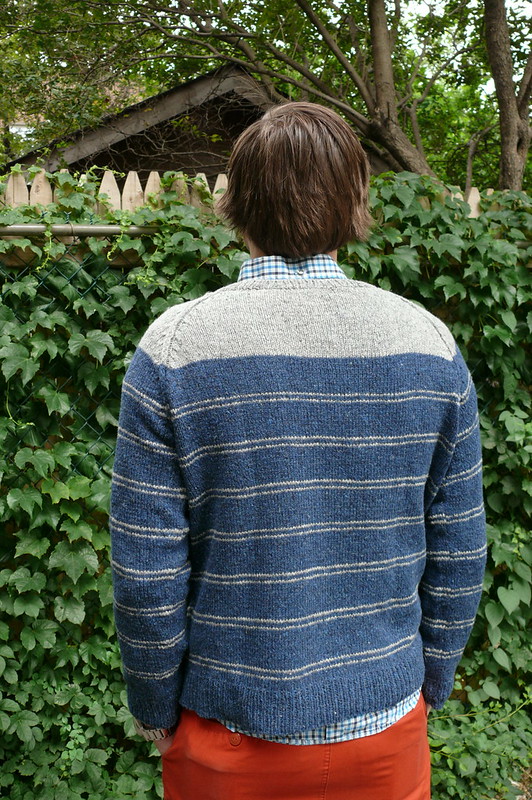 This raglan pullover is knit flat from the bottom up and seamed, with visible raglan seams. It took me 5 months to knit it, although I didn’t knit very aggressively, just here and there as I felt like it (I cast on last May and I’ve never been much of a summer knitter, but I’d hoped to finish in time for cold weather). Then I spent a month procrastinating on seaming things up, tried a few times, failed a few times, then let it sit on my work table for, ohhhh, six months. I felt terrible every time I laid eyes on it, but I just didn’t want to try seaming it again! For some reason I couldn’t get things to line up right (I think I was picking up the wrong bar between the stitches on one side, so I kept having a different number of bars on one side than the other, if that makes sense) and that was really visible in a striped garment. Finally I decided that I HAD to finish it for Blake’s birthday at the end of May, so I gritted my teeth and just stuck with it until I was done.

Here’s where I should mention, like other knitters have, that it’s just not possible to seam with LOFT. It broke over and over, even when I twisted it to add tensile strength, so I had to buy different yarn in as close of a color match as I could (I ended up using Cascade 220 Fingering because it was the cheapest thing I could find). Honestly, this annoyed me, because I’d already spent so much on LOFT that the last thing I wanted to do was buy MORE yarn, plus, now I have an entire skein (minus a couple of yards) each of two different colors taking up room in my stash, neither of which I’m particularly excited to use for another project. Ugh! 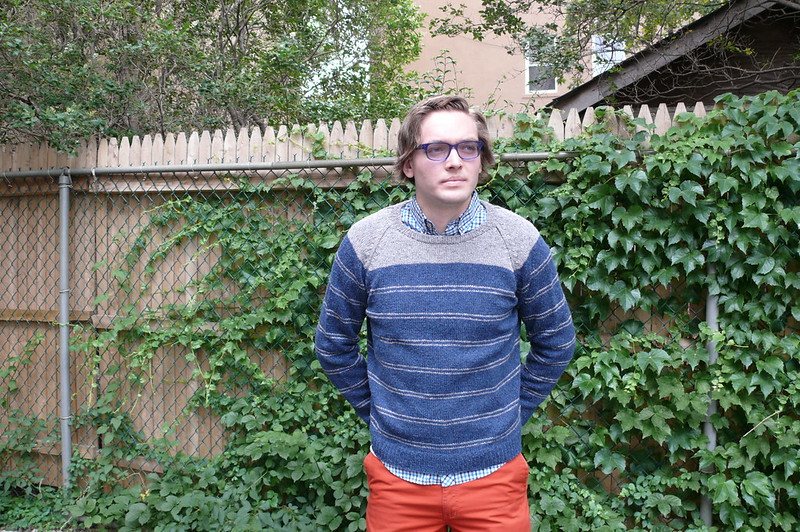 Because I was making this for Blake and he is really picky about fit, I was really careful about checking the finished chest and sleeve measurements, and about both swatching and blocking accurately. Unfortunately, it didn’t occur to me to check the finished garment length (from neck to hem), and it was really too short for Blake. I shouldn’t have assumed that the designer’s hem length would be what we wanted… ugh! When he tried it on, it looked really stupid (actually, the length was great for me!). So, I reblocked the entire sweater aggressively and was able to gain about an inch of extra length, which isn’t perfect, but at least it’s wearable now. It annoys me a bit, though, after spending a small mint and countless hours of my life knitting a men’s sweater in flat stockinette in a fingering-weight yarn!! But I’m not about to frog the whole sweater just to make it longer so it’s going to stay as it is (that’s the downside to knitting bottom-up… trying it on as you go just isn’t an option). I also feel like I see some pulling at the armscyes in these photos, but I didn’t notice it when he was wearing it so maybe I’m just being paranoid!

At the end of the day, Blake is really happy with the sweater and not miserable and sad as these photos might suggest (at one point in the photo session I asked him if he thought he was smiling, ha!). Frankly, I’m just happy to have this project off my work table and in his closet! 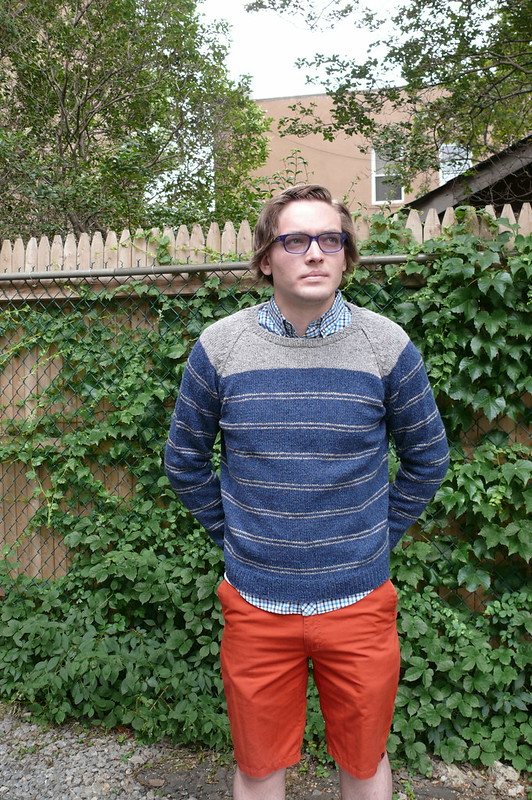 So tell me, have you ever knit something for any of the men in your lives? How did it go? Any success stories or project recommendations?

Finally, one last order of business- the winner of the Wool and the Gang giveaway, as chosen by random.org, is… Lee! Give me a shout and I’ll get the kit off to you!