Ummmm, if you’re been around this blog at all before, you probably know that I loooooove coats. I love making them, I love wearing them, I love thinking about them! So it’s a little embarrassing to tell you that this coat has been in the works for nearly two years! Whoops! I took advantage of the break between the fall and spring semesters to dig out this UFO and sew it up, and wow, I’m so pumped that I did! It’s been a soul-crushing month/year/you name it, so it was nice to have a project to force myself to work on instead of obsessively reading news all day every day. 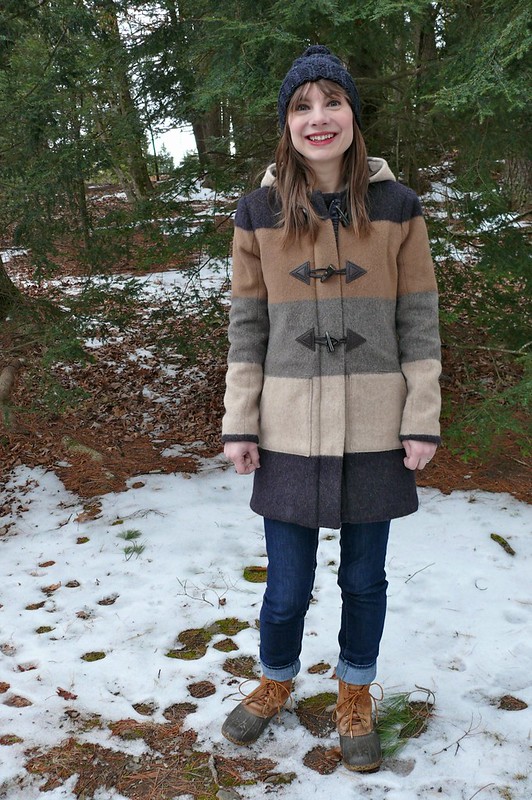 This is the Grainline Studio Cascade Duffle Coat, view B. I snapped up the pattern as soon as it was released, but this was in late winter 2015 and I tucked it away, planning to make it in the fall when it was seasonally-appropriate to make it and wear it right away. Last January I got motivated to start this coat, so I steamed the fabric, cut out all the pieces, fused everything, and then… got distracted by a big costuming project with a looming deadline (also a coat! at least it was on theme!) and stuffed it into my cedar chest, where it sat for ages, until I had to pack it up to move. I finally pulled it out a few weeks ago, nearly a year after I’d cut everything out!

A note to PDF users: this might not be super fun for you. Uncharacteristically, I bought a hard copy of the pattern- I just couldn’t face the thought of printing and taping that many sheets of paper! I was so glad I did, because life is just too short to spend it all putting together a pattern orrrrr tracing (I admit it- I was saucy and cut the pattern out without tracing… I REALLLLLLY hate tracing). 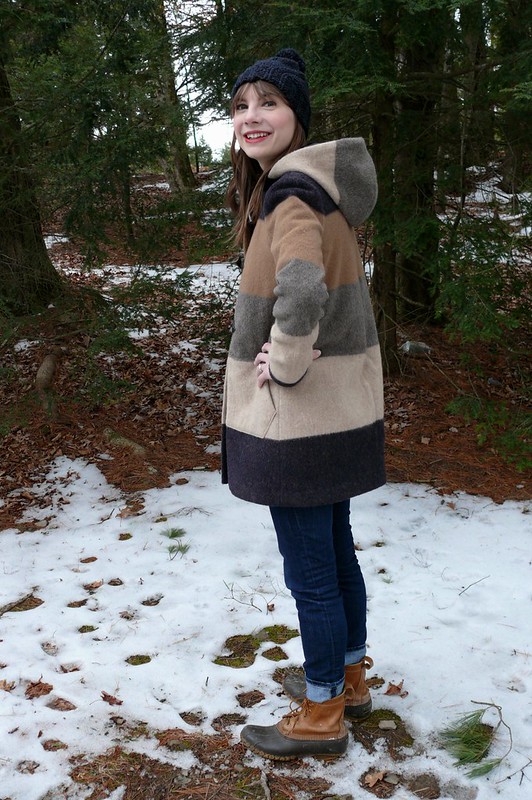 The fabric I used is a wool coating from Mood Fabrics NYC that I bought ages ago, intending to use it to make the Named Yona Wrap Coat. I stalled on that project when I couldn’t think of a way to match the stripes nicely across a two-piece raglan sleeve. When the Cascade pattern was released, I was so pumped that I hadn’t used this fabric for anything else! I really love the combination of colors in this coat- navy, camel, cream, and grey. I can wear it with so many different things in my closet! 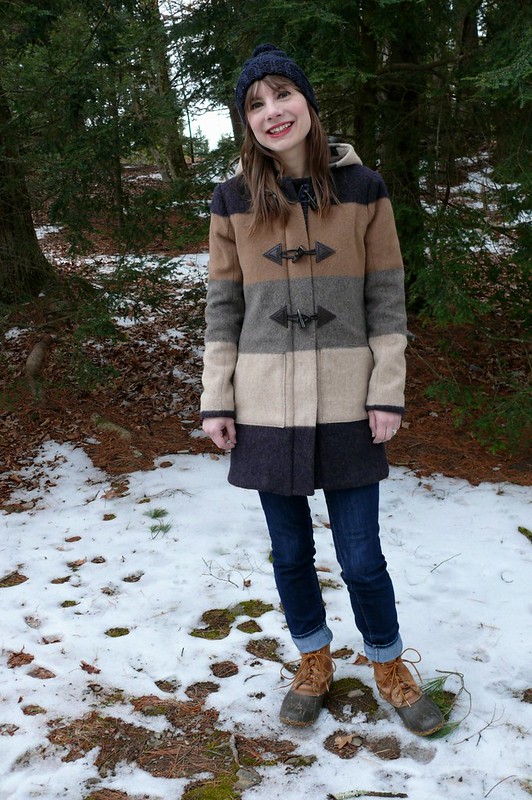 I used this sunback lining from B&J Fabrics (I’m pretty certain it’s this exact one, although I bought it in store instead of online). Sunback is sometimes called “kasha”; it’s a flannel-backed satin, so it’s smooth and slippery like lining fabric on one side, and has a brushed nap on the other. This particular type is 51% acetate and 49% cotton. I’m partial to it for coats as it adds some extra warmth.

For me, personally, sunback isn’t enough for a winter coat, so I also interlined it using lambswool from Steinlauf & Stoller. I just used a single layer (it’s sold in a sort of double layer, so you could easily cut out double layers if you were so inclined). Steinlauf & Stoller doesn’t sell online, but you can call them and order over the phone if you can’t find lambswool locally.

For the coat trimmings, I used a YKK separating zipper from my favorite zipper source in the Garment District, SIL Thread. I bought toggles from Pacific Trimming. The pattern includes templates if you want to cut your own leather/faux leather and make toggles yourself, but that wasn’t something I wanted to get involved with at all! For the zipper bands, I used one of my favorite Japanese cottons from my shop for a little peep of print whenever my coat is open. And I lined my pockets with bits of flannel leftover from one of my favorite Archer buttondowns. 🙂 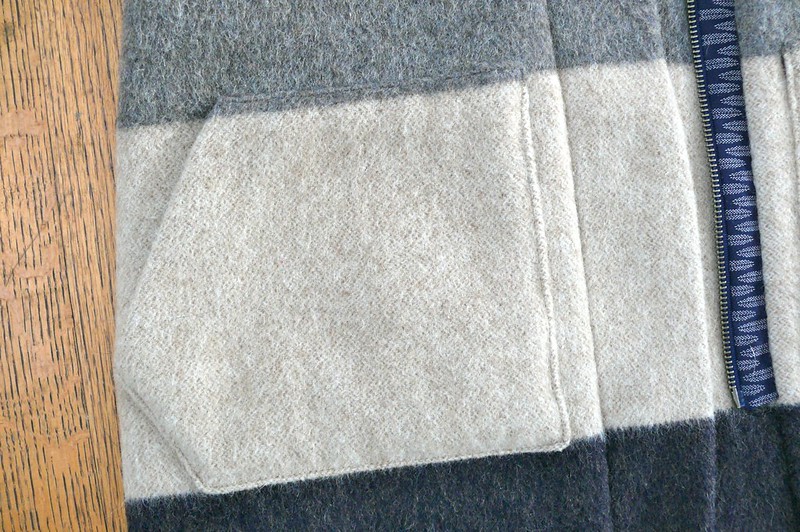 I cut out a size 4, which is my usual Grainline size (my hips fall into a smaller size on their chart, but I don’t mind some extra wearing ease for a coat). I didn’t want to make a muslin, since it’s kind of pointless to do that unless you’ve got a heavier-weight fabric that’s similar to coating. Instead, I just measured the flat pattern pieces and compared those measurements to another coat in my closet. I was under the impression that I’d done my usual 1/2″ narrow shoulder adjustment, buuuut, upon further review, I didn’t. That’s one drawback to sewing up a project a year after cutting it out- you can have a little confusion! 😀 My only sizing adjustment was to lengthen the sleeves by 1/2″. It probably wasn’t necessary, but too-short sleeves drive me CRAZY, so it seemed like the right thing to do. 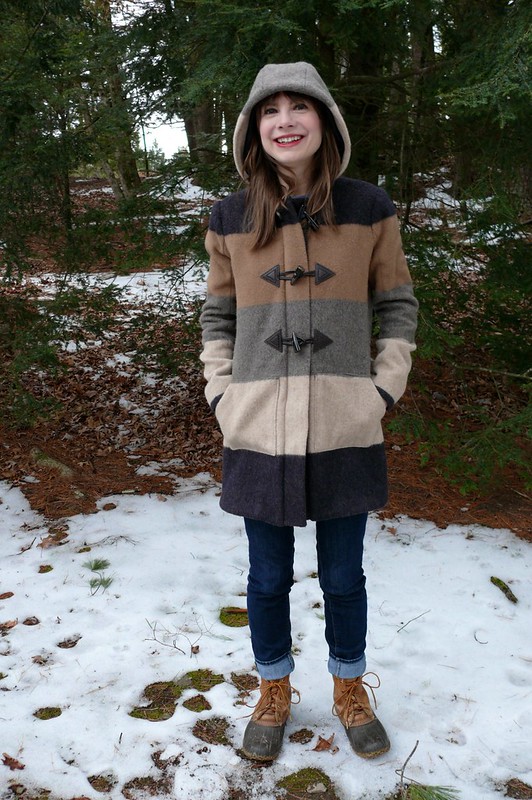 I needed to make some pattern alterations to be able to use this wide stripe efficiently. The original pattern has a yoke and a low waist seam, but I combined these three pattern pieces so that I could cut out the coat back and fronts as just one piece. It would have been a real pain in the neck to try to balance the stripes across three pattern pieces, and it would have sucked up way too much fabric. I cheated a bit and cut the center hood piece on the cross grain so that it’s just solid grey- I didn’t want to have too much stripe chaos going on back there! 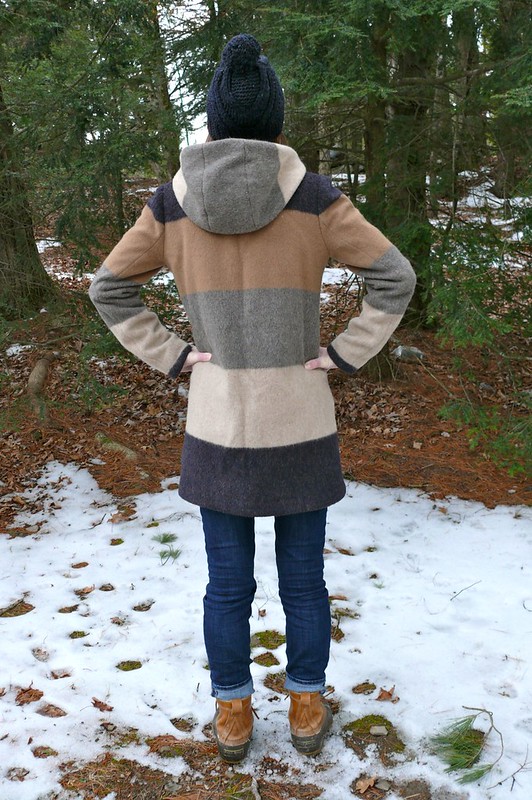 Another modification I made was to draft new pockets. I really don’t like standard patch pockets! I put them on my first Gerard coat, as the pattern instructed, but they’re annoying to put your hands into and I really use my pockets since I have a pretty long walk to and from the subway. My original thought was to swap the patch pockets out for welt pockets, but when I started to look at images of duffle coats for inspiration, they ALL had patch pockets. I thought the coat might look kind of naked or weird with welt pockets, so I took inspiration from the kangaroo pockets that you usually see on hooded sweatshirts and drafted something similar to those, with a triangular angle to it to slightly mimic the toggles that I used. I’m really happy with the final pockets! They’re really comfortable to use, they’re super warm, since they’re flannel-lined, and they have room to jam in a pair of fingerless gloves, keys, and my phone. I’m not gonna lie, though, it was a total brain-bender to figure out how to draft a pocket piece with a self-facing, and a complementing lining piece! My brain just doesn’t work that way, so I had to mock up pieces with paper and fold them until I could figure out how to do it. 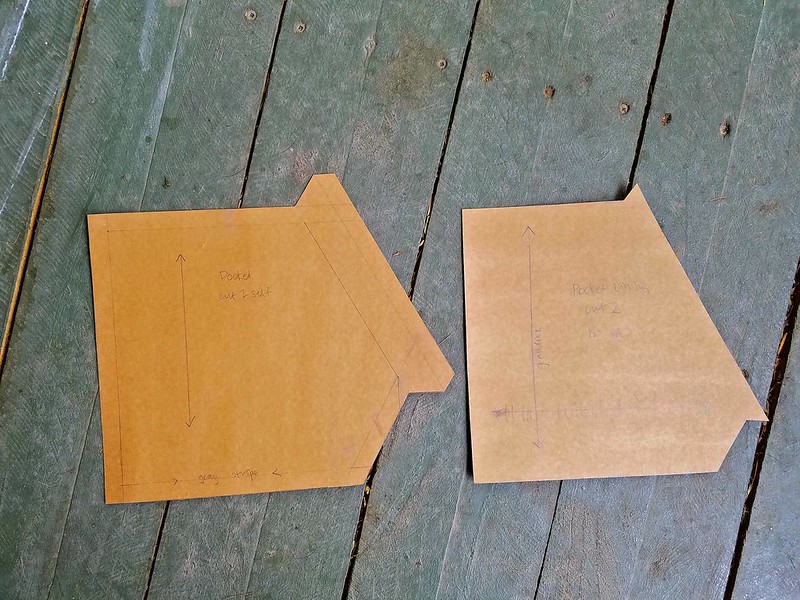 The final change I made to the pattern was the position of the pockets. They are meant to sit lower down, about 1/3 on the cream stripe and 2/3 on the bottom navy stripe. Unfortunately, I didn’t have enough fabric left to cut the pockets that way and match the stripes. Not matching wasn’t an option, so instead I opted to position them higher and honestly, it doesn’t feel weird to have them sit higher. It feels comfortable, so it’s all good! 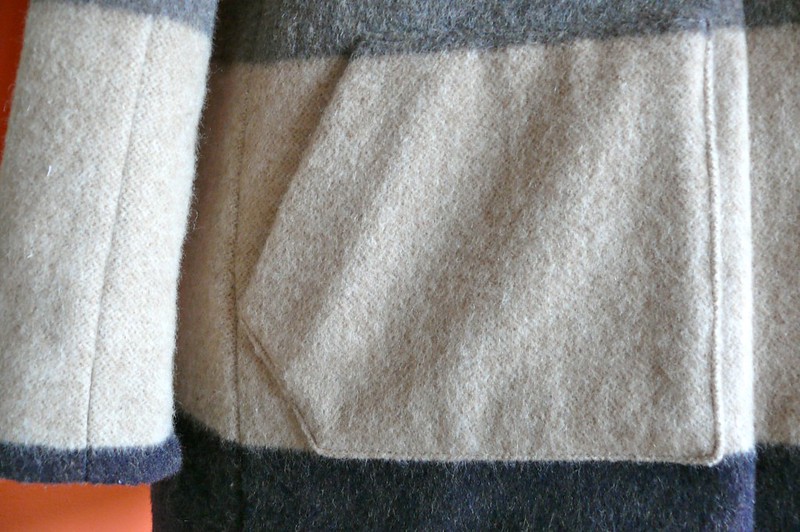 As I mentioned briefly above, I interlined the coat with lambswool. I referenced my favorite tailoring book, The Complete Book of Tailoring, (Amazon, but not an affiliate link) by everyone’s favorite sassy seamstress, Adele P. Margolis. If you’re into classic tailoring, I definitely recommend this book- it’s out of print, but you can pick up used copies for less than $20. I followed her directions for inserting each piece individually by hand and catch-stitching it to the very edge of the pressed seam allowance, which makes for about the least-bulky results imaginable. It was slow, but totally worth it in the end. I used the garment pattern pieces to cut out the coat front and back, and I also cut out the upper sleeve, but after basting it in, I thought it would make my sleeves too constricting. Word of warning: the sleeves aren’t for the bicep-fabulous! They’re pretty slim-fitting, which actually looks really nice with the roomy silhouette of the coat, but if you know your way around the gym, you probably want to give yourself some extra room. 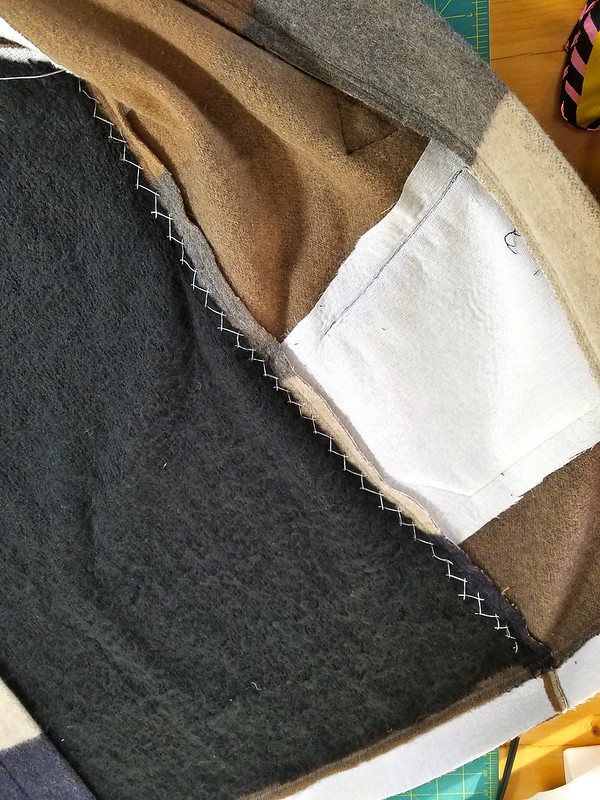 The thing I dreaded the most about making this coat was stitching on the toggles. I really, really, really didn’t want to do it! It stressed me out to think about not being able to seam rip them if they didn’t go on straight. I bought an extra one, which Jen recommends, to do a dry run before sewing one on the actual coat, and I noticed that the foot sort of stuck to the exposed parts of the toggle. Jen mentioned that some people put scotch tape on their sewing feet, but she didn’t do that because she didn’t want to leave any residue. So I decided to just put tape on the toggle itself, over every area that the presser foot would touch, which worked a charm. I used my 1/8″ edgestitching foot, a leather needle, and upholstery thread (bought from Pacific Trimming… it’s not as thick or stiff as the thread we buy at my upholstery job). My stitching is really ugly and I’m definitely not going to show you a closeup, but I’ve just vowed not to look too closely at the toggles so that it won’t bug me too much. 🙂 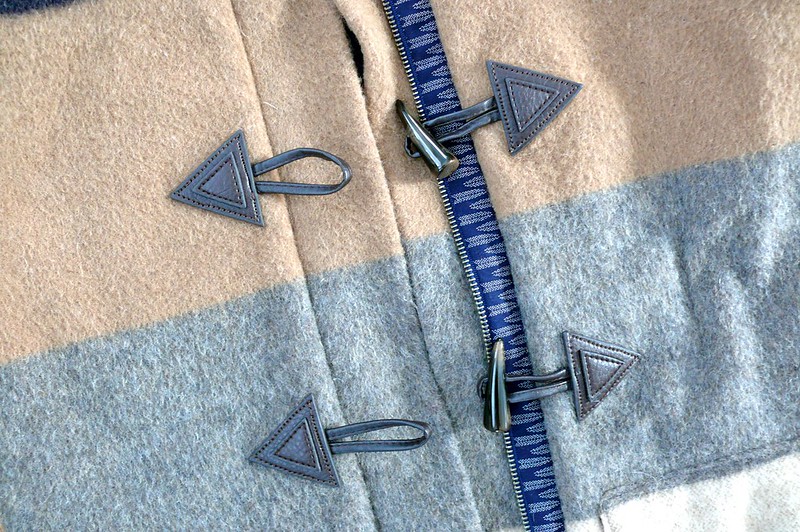 The pattern instructions for the bagged lining don’t tell you to hem the coat, but I went ahead and did a blind hem by hand for added structure and stability.

I’m super, super happy with this coat, and I’ve worn it every day since I finished it a week or so ago! It’s such a nice, classic style, and I’m really excited to wear it for years to come! I would recommend this pattern to anyone who wants to tackle a coat, and if you get stumped by the written instructions, you can always reference the photos in the sewalong hosted on the Grainline blog. I probably can’t make any more coats at this point, since my closet is fairly well stuffed with them, but this actually fills the hole left by my old peacoat, which was the perfect thing to wear in between jacket and parka weather. And I can’t tell you how satisfying it is to turn a UFO into a garment! I felt so productive getting this out of a bag and into my closet! 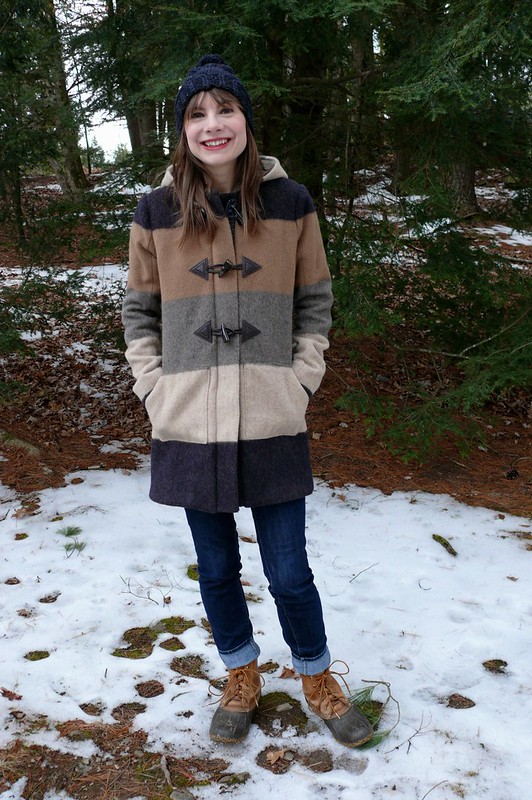 In case you’re curious, the hat I’m wearing in these pics is my favorite cold weather hat, the Fidra pattern by Gudrun Johnston. It’s knit up in bulky Brooklyn Tweed Quarry (colorway: Lazulite), so it’s both a fast knit and really warm for bitter days. I made it about a year ago, and I’m still loving it! 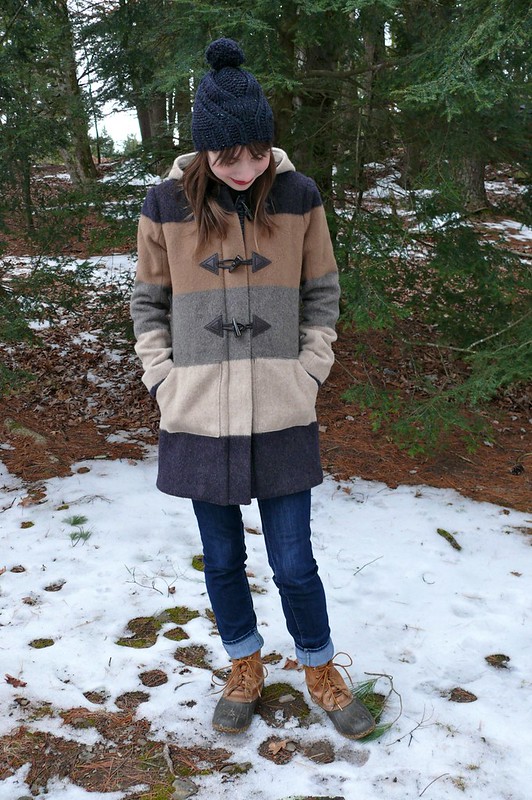 OK, friends, what have you been making these days? Anybody obsessed with coat making? Planning your first attempt at one? Do tell! As for me, it’s back to school now, so this is probably my last big/fun project for some time! Boooooo! 😦