I found this chair on Craigslist recently, and while I bought it because I love the shape and style, this is also a great upholstery project because it’s something that is totally achievable for a newbie. Why? It’s nice and square, which makes it much, much easier to manipulate the fabric. Navigating curves is fiddly at best and downright frustrating on bad days. So, while you may love the Saarinen womb chair, I wouldn’t recommend something like that for your first project!

Now, the odds of you finding the exact same chair as mine (or even wanting one just like it!) are slim to none, but my goal with this post is to help you think through the steps before you attack any piece of furniture. Although each piece is put together its own unique way, I want to help get you in the upholstery mindset. With that in mind, our goals for today are:

The first thing you should do when you’re starting an upholstery project is to photograph the chair in its original state. Make sure you focus on all the little details- how the corner comes together, where there’s welting, pleats, or buttons, how the fabric wraps around the legs. When you’re working with your new fabric, you’ll be glad you have photo reminders to refer to when you can’t remember what something looked like! 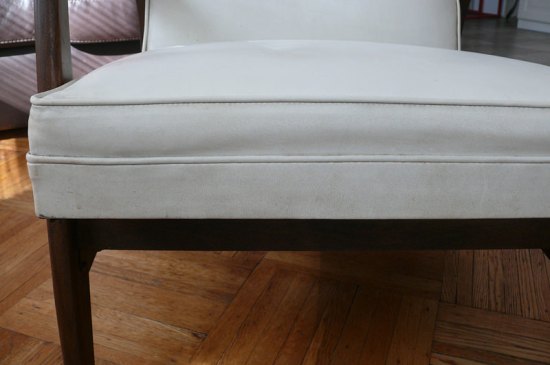 Next up, take detailed measurements, and sketch the chair, labeling each part with its corresponding measurement. This might seem like a lot of work when you’d rather be attacking the chair, but again, it’s something you’ll almost certainly wish you’d done once you’re in the middle of the project. 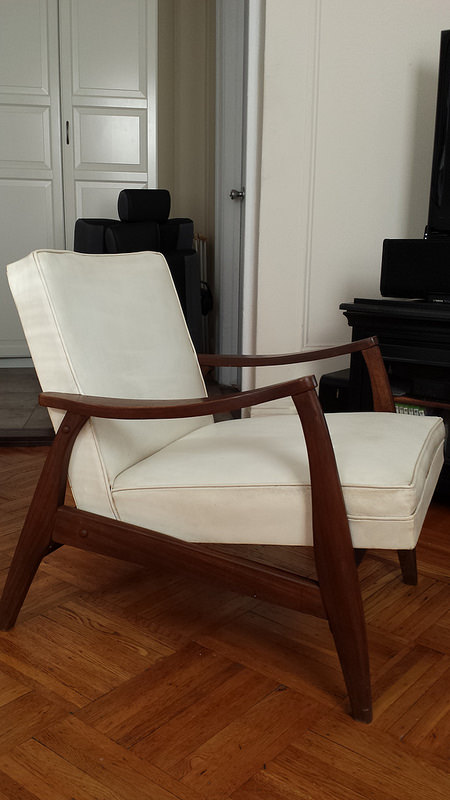 One last thing before you dig in… take a second and sit in the chair! Does it feel hard? Lumpy? Saggy? Loose? Can you feel springs poking through? Make a note of it!

Here comes the fun part- time to destroy your old chair! Here’s where you get to start using fun tools! It’s good to have all three of these in your toolbox- I use them all for almost every project. 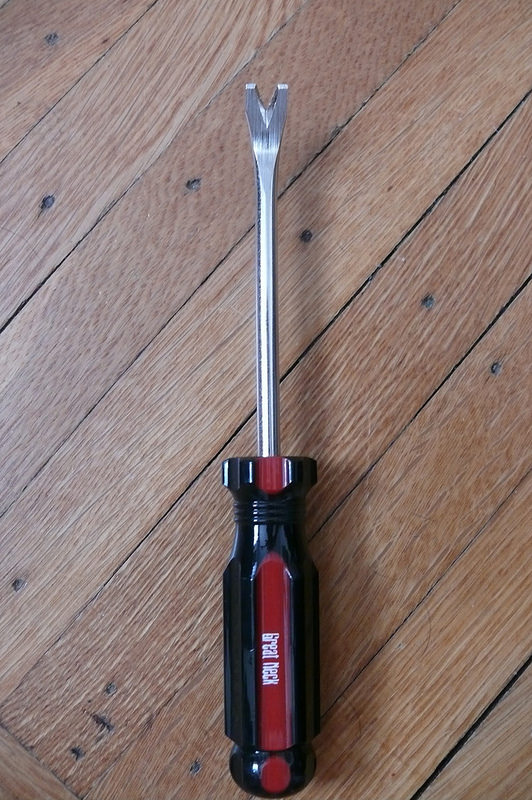 The first tool is a tack lifter. If you’re working with older furniture, you’ll almost certainly need this. You slide the tool under the head of the tack, and use it like a lever to pry it loose. Here’s the one I have (affiliate link)- it’s under $6 on Amazon, and you may even be able to find one at a hardware store. 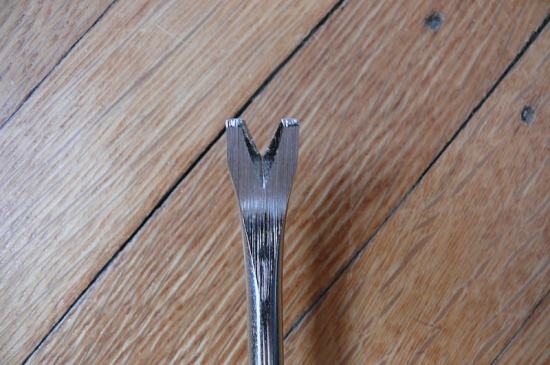 In older furniture, especially if you’re removing decorative tacks, like the ones you see on fancy leather chairs like Ron Burgundy might have in his office, the tacks can be really brittle. The heads will sometimes pop right off, leaving sharp wires sticking out. A pair of needlenose pliers is perfect for pulling out broken-off tacks or bent staples. Dig around in your tool box- you probably have a pair of these already!

This last tool is a staple lifter. It works just like a tack lifter, but the head is a bit sharper and more beveled so you can slide it under staples. Be careful with this guy- I stab myself at least once every single time I use this! But if you’re recovering newer furniture, or if you’re planning to use a staple gun yourself, you’re going to want one of these puppies! A certain well-known sewing blogger disclosed to me that she once removed the staples from a chair with a screw driver and was really, really sorry she did when her hands were totally torn up at the end of the day! The staple lifter I have and linked to is a bit more expensive, coming in at $23ish. There are cheaper ones available, but I haven’t used them so I can’t comment on them. Just make sure you buy one that’s intended for upholstery and not for office supply staplers. 🙂 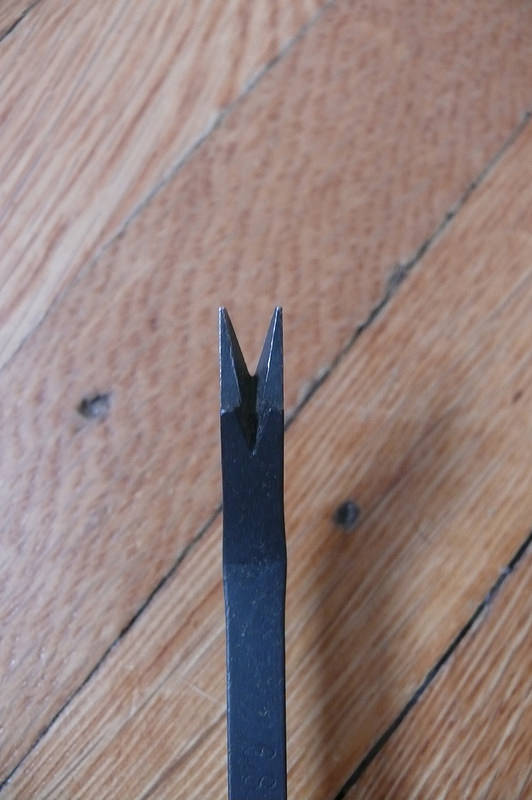 Alright, you’re ready to start taking apart your chair! Grab a notepad and, as you remove something, jot it down. You’ll need to come up with an order of operations that’s specific to your chair, and writing down every step as you undo it is a great way to make sure you don’t forget something. Also, working on sawhorses is a good idea so you’re not bending over, but if you don’t have those at home (I don’t), you can rest it on top of a card table like I do or another firm, stable surface.

The bottom of the chair is almost always the first thing to remove- you’ll see visible staples or tacks. from there, it’s often the outside back, and after that, it just depends on how your chair was put together. Just keep removing tacks or staples as they appear, and remove the fabric as you can. After each piece comes off, jot it down on your notepad, and take photos, too. Do yourself a favor- if you remove screws, pins, pegs, tags, or anything else that needs to go back into the chair, gather them up and put them in a ziploc bag! It’s really easy to accidentally throw away something that you’ll wish you had later! 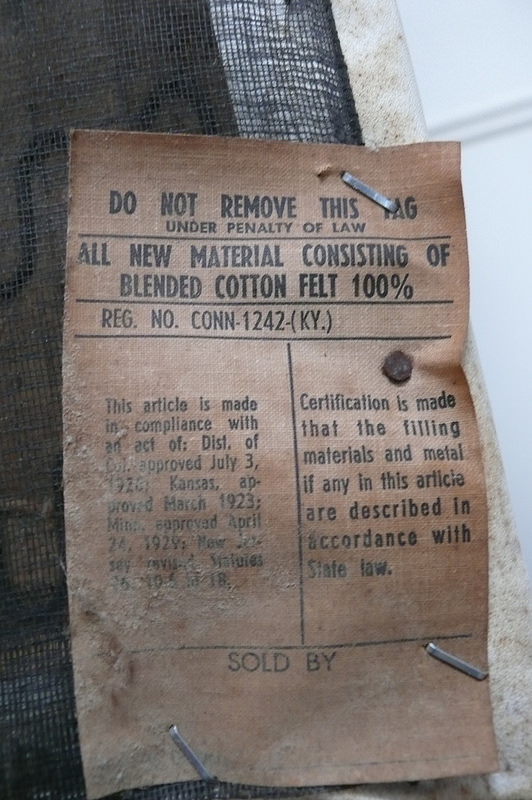 If you’re just recovering your chair, just remove the fabric and call it a day. But, since you’ve already got the thing open, this is a good opportunity to replace the guts. If you’re doing that, photograph each layer as you take it off, and write it down.

For example, here’s what’s under the vinyl, a layer of cotton:

On the seat, under the cotton, there’s burlap, with spring wire running through it: 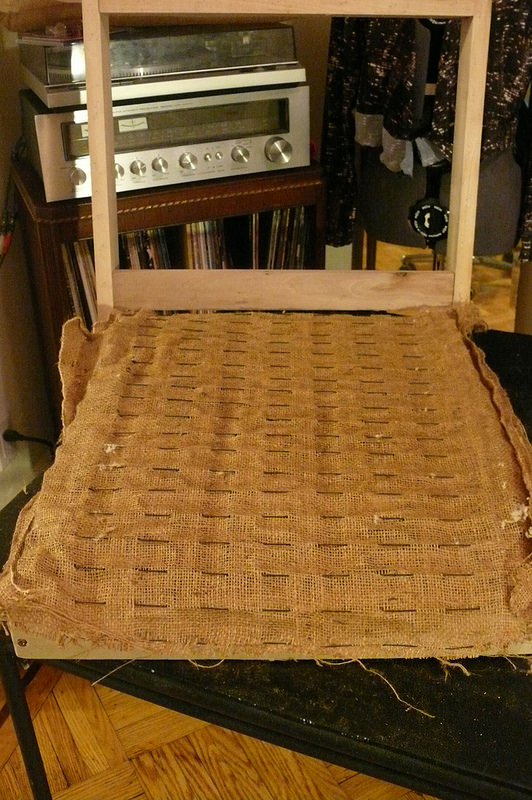 And, finally, the springs! 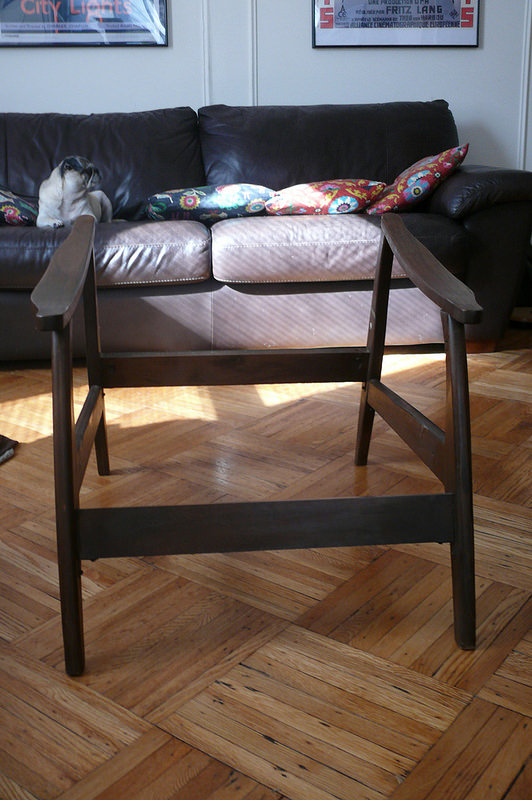 Now, take a look at the notes you took. Read through them carefully, and now, create an order of operations for yourself. You’ll be working in the opposite direction from the way that you stripped the chair, so the last thing you removed will be the first thing you put on. Make sense? This is a really crucial step- you don’t want to spend an entire day hand sewing your chair closed only to realize that you should have put the legs on first!

One last thing to do is to decide if you want to deviate from way the chair was originally put together. Let me give you some examples: I opened up an antique chair recently and found that it was stuffed with straw. That’s a situation where you’d want to deviate from the original. Or say it’s filled with horse hair- gross! You can think through substitutes for stuff like that. In my case, I’ll be changing up a few things. My chair was originally covered with vinyl, which was held in place in the back with decorative tacks. I’ll be using regular fabric, so I’ll change up the construction so that my back will be sewn on instead. These are the kinds of things that you might want to think about, particularly if you’re using a different material than what was originally on the piece.

Alright, I hope you guys are excited to tackle the guts! It’s gonna be fun! In the meantime, take a moment to clean up the frame. Carefully inspect it for any cracks or loose screws and take care of them now. Fill any holes (I use a mixture of wood glue and sawdust) and sand the interior frame so that your fabric won’t snag on any rough spots. If you plan on staining or varnishing, now’s the time! If not, clean the legs, arms, or other visible bits with a little Murphy’s Oil Soap and fill in scratches by rubbing a walnut (out of the shell) on them. You can finish up with orange oil or your preferred furniture polish. While you’re doing that, I’ll be working away at the next post in the series… stay tuned!